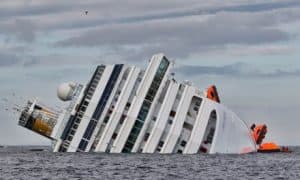 A woman’s body was found inside the 114,000-ton Costa Concordia during a dive mission on Sunday. The woman had a life-jacket on and was located on the part of a ship that was underwater, according to local authorities.

The search and rescue mission has been touch-and-go all week with inclement weather that caused the ship to slide. Fears are that the ship could slide deeper into the sea totally submersing the vessel.

The dutch salvage company Smit Tak will begin pumping fuel off the ship when given the go-ahead by authorities. Right now oil booms surround the ship as a safety measure, but leakage of the 2,400-tons of fuel is not an immediate threat. It’s still too early to tell if the ship will be completely salvageable or a total loss. The liner was insured for $513-million. Analysts are saying that claims could exceed a billion dollars.