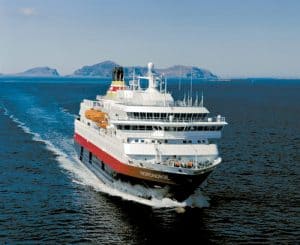 Guests aboard a Hurtigruten ship have a head start on anyone trying to complete leading travel publication Lonely Planet’s recent list of the “Top 17 Experiences in Norway” — for the simple fact that 15 of those 17 experiences can be had by relying on Hurtigruten.

Most of the list can be completed while enjoying the company’s Coastal Voyage, now in operation for nearly 120 years, including the #1 choice of Geirangerfjord, A UNESCO World Heritage Site; #5 – exploring the colorful historic buildings of Bergen’s Bryggen; and #15 – Sami culture, the indigenous people of the far north of Europe.  Other choices such as #7 – Svalbard can be experienced on Hurtigruten’s Spitsbergen Explorer sailings aboard the MS Fram during the summer months, or visits to Oslo (#17) by extending the stay as Oslo is a major gateway used by Hurtigruten guests.

Hurtigruten is a world leader in expedition cruising, sailing to the most remote of destinations – including Antarctica, Greenland and the Arctic’s Spitsbergen – as well as year round along Norway’s coast and Europe in the spring.  The company’s fleet of 13 intimate ships, which each carry 100 to 646 guests, allows travelers to enjoy unique destinations in a relaxed atmosphere.