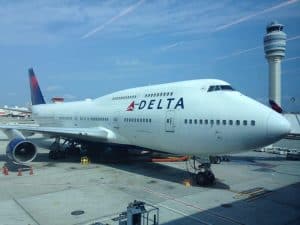 An international Delta Airlines jet ready to go to Tokyo.

I am currently on a flight from Jacksonville to Seattle, with a three-hour layover in Atlanta. To be honest, I wasn’t that excited about my three-hour layover at the Atlanta airport – it has always been so blah to me. But come to find out, it’s not that bad if you know what to do.

Here are five ways to survive an airport layover:

1. Plane watch.  I am an aviation geek so I always make my way to the international terminal to check out what planes are parked where. Today I saw my first ever, up-close, Delta 747 that is heading to Tokyo later this afternoon.

2. Research. If you’re going on vacation, spend some time online (smartphone, tablet or laptop) and learn about where you’re going, things to do, and tips and tricks.

3. Try a new restaurant. Yeah, so we all know that airport food isn’t five-star dining, but some airports have franchises and venues that you won’t find in your hometown. There’s a BBQ joint in the Southwest terminal in Nashville that is a must every visit.  Want to spice it up even more? Download the GateGuru app and create your own pub or food crawl.

4. Exercise. Everyone eats way crazy while traveling; use the airport as a way to burn some of those pre-or post-travel calories. Atlanta is one of my favorite airports to exercise in because of their underground tunnel system. If you’re layover is long enough, go outside and get some fresh air. Just be conscious of your departing flight. TSA could be a beast at times.

5. People watch. People will be coming and going from everywhere. Take advantage of it. Take a seat and take it all in. But you don’t have to just watch, I just met a couple in Atlanta that are heading to their 60th class reunion in Montana, and they live two streets down from me! Such a small world.