And just like that, your countdown clock tells you it’s finally the day you’ve been waiting for! All you have to do is get to the pier, board the ship and have an awesome time. But over the years, we’ve discovered a few things you can do to make that first day even better, and we’re here to tell you what those cruise embarkation tips are!

1. Give yourself plenty of time.

We’ve all seen the videos of people running to catch the ship as it’s pulling out of some exotic port. But there are some folks who wind up doing the same thing even on that very first day! Trust us when we say that the last thing you want is to start your vacation running around like an Amazing Race contestant trying to avoid being eliminated by Phil Keoghan.

Unless you have the most impeccable timing ever, you’ll likely wind up having to spend a little time hanging out at the port before being able to board. So take a seat and then observe the people around you. Why? To find out who you should try and avoid during the week! If someone is loudly complaining before they’ve even boarded, you don’t need to see their passport to know it reads Debbie (or Donald) Downer! On the flip side, you can often meet new folks while waiting for your boarding number to be called. We once wound up bonding with a group of women who spent the next week being the life of every party… and making sure we were “dragged” into the fun!

Occasionally, there will be things that can only be dealt with once you’re actually on the ship. Maybe you want to get passes to the spa or a for-fee adults-only retreat. There are numerous reasons one might need to deal with the Guest Services desk, and the sooner you get that done the better. Wait too long, and lines will be long or, worse, the reservation you’re hoping to land will no longer be available. It may mean putting off your fun for a few minutes, but dealing with this kind of thing right away will prove worth it in the long run.

Everyone and their mother heads for one of two places, the second of which we’ll discuss next, and both of which you can easily avoid. If you’re feeling a little peckish and want something to nosh once you’re on the ship, you can either follow the masses to the buffet… or check out one of the other venues. Rare is the ship that doesn’t have a second eatery — often a main dining room — open for lunch. Why fight the crowds when you can start thing off on a civilized note?

The exact same theory applies here as the buffet: A whole lot of folks will belly up to the first bar they see in order to toast the start of their vacation. But wander around a bit and you’ll find a bevy of bartenders just waiting to help you kick things off in style… often in a less crowded venue where your wait will be fan shorter!

6. Get your casino card.

If you’re planning to gamble while on board and need to renew your rewards card or pick up a new one, this is the perfect time to do it. The casino won’t be open for gambling, but most ships will have someone working the Players Club desk. Getting this out of the way now means that you won’t have to do it once the ship hits international waters and everyone piles into the casino!

What is your embarkation day tip? 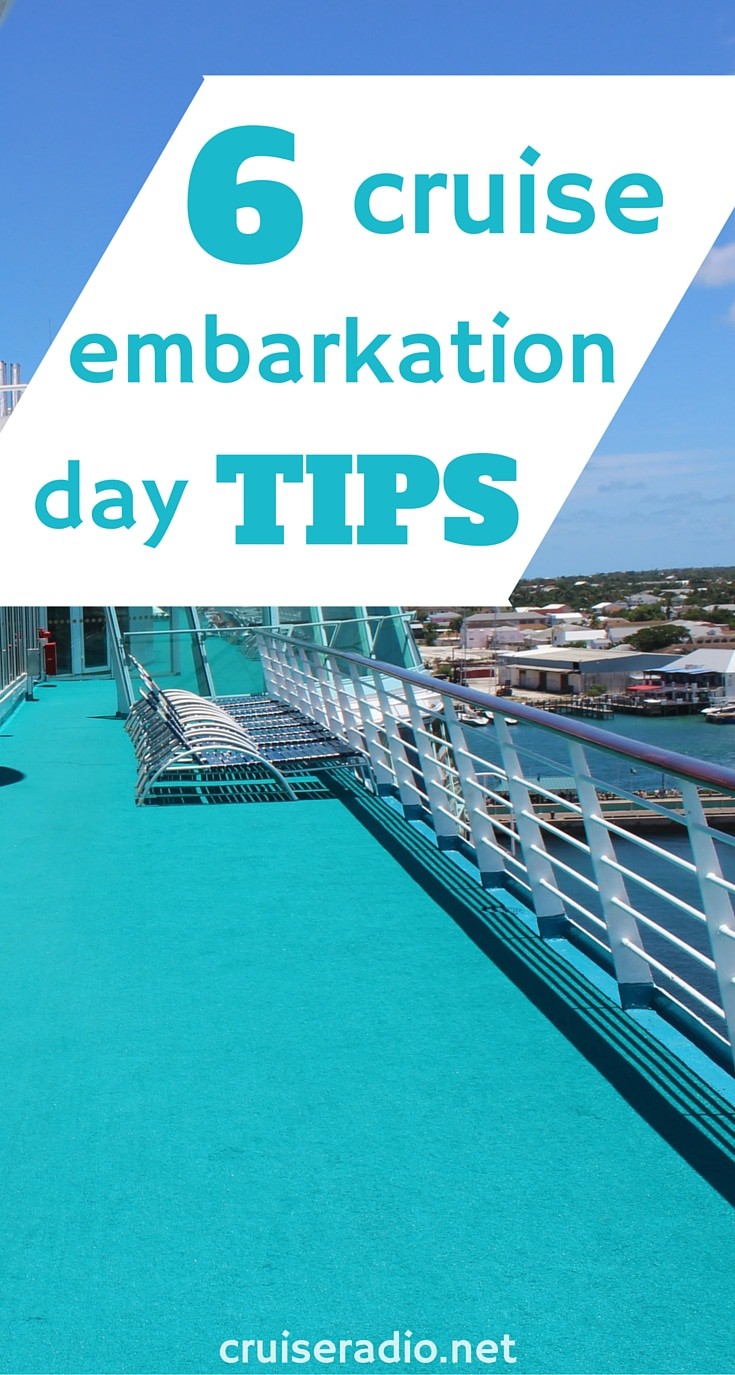 Is a Disney World Shore Excursion Worth It?

6 Reasons to Take a Solo Cruise

Send this to a friend
Hi, this may be of interest to you: 6 Embarkation Day Cruise Tips. This is the link: https://cruiseradio.net/6-cruise-embarkation-day-tips/