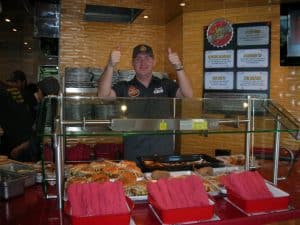 The last thing you want to do when your cruise is over is get on the scale and see how much weigh. Trust me. On a 2011 sailing aboard Carnival Liberty I put on nine-pounds on a seven night cruise, thanks to a week of drinking and non-stop Guy Fieri burgers.

Because it happened to me, doesn’t mean it has to happen to you.

1. Don’t be lazy. No one said you have to go to the gym on your Caribbean paradise but at least make an attempt to be active. Consider walking a couple laps the outside jogging track in the morning. It’s very refreshing on a sea day.

2. Take the stairs. Okay so will probably won’t prevent weight gain, but it will keep your metabolism going, in return burns calories. 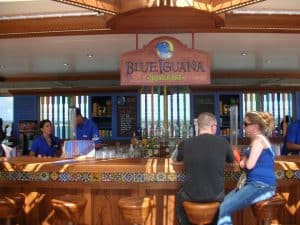 3. Clear alcohol. If you’re going to drink, throttle back on the hardcore booze. According to a fat buster website, a pina colada has 650 calories, compared to a sprite and vodka that has a measly 150 calories. It gets better, a long island iced tea has 850 calories! No one says you have to count your drinks, but know before you order.

4. Watch food intake. In the land of unlimited buffets, bread and frozen yogurt, it’s almost impossible not to gorge yourself – but be careful. Going back for seconds and thirds won’t help your case. Consider becoming friendly with the spa menu and salad bars.

5. Active excursions. Try booking an excursion that actually has you doing physical activity and not sitting on a tour bus all day. Some examples of active shore excursions would be snorkeling, hiking and swimming. Most cruise line excursions have an activity and strength level next to each excursion.

6. Say NO to spa scams. A lot of cruise line spa’s will offer you body wraps that claim this miracle weigh loss. They put fancy electric currents on you and wrap you in seaweed and claim you’ll lose inches. What they don’t tell you is that you only lose water weight. Your body carries water weight naturally and you shouldn’t fall fool to paying hundreds of dollars for these so-called miracle treatments.

It doesn’t take me telling you that the weight concept is simple. You have to burn more calories than you intake. Do that and you won’t gain weight.