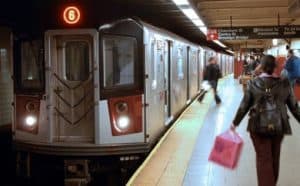 Everyone should experience sailing out of New York City at least once. The sights, the sounds, the weather – it’s one great package. With that said, New York City is not cheap. The closer you stay to the cruise terminal the more money you’re going to pay for your hotel stay.

Recently we were in New York for a taping aboard Norwegian Breakaway and came across some great first-time lessons.

1. Location is key. Depending on where you are cruising out of is where you want to stay. We stayed at the InterContinental Times Square hotel on W 44th street because it was only a few blocks from the terminal and we wanted to be close. The hotel was walking distance and less than a $10 cab ride to Pier 88. There are other areas to stay in around the city as well, it’s a matter of choice. Know what cruise terminal you’re sailing from and make your choice from there. There are a handful of cruise terminals in the New York and Jersey area.

2. Cheaper Hotels in New Jersey. Thanks to the metro systems, you can stay in Newark and be at the Manhattan Cruise Terminal at Pier 88 in about 45 minutes. If you are budget conscious you may want to consider staying around Newark and catching the train into the city, transferring when you get into the city and heading to your port. A hotel in Manhattan can cost up to $500 per night while a hotel at the Newark Airport can cost as little as $88 per night at the Ramada. 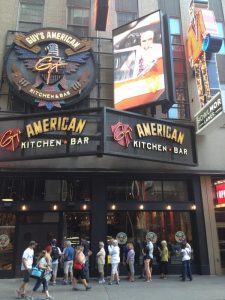 3. Turn to Facebook. This may sound basic but because you’re going to a new place, ask your friends on your Facebook page what they suggest and what they do. Chances are your friends will provide a lot more insight than searching through thousands of Trip Advisor pages.  A good example is me asking my friend what’s the cheapest way to get into the city from JFK – he advised the metro. Without asking I would have taken a cab for $58+ instead of paying $7.50 on the AirTrain and metro.

4. Don’t Bring a Car.  I’ve seen hotels charge as much as $40 per night in NYC for car parking. The cruise pier charges $35 per day ($245 per week). If you’re flying in there is no reason to rent a car. If you live within the region you may want to consider taking a train into the city and skipping the car hassle.

5. Get a Metro Card. Use the metro (subway) system! For $30 per person for seven days you can get an unlimited metro pass. Even if you are planning on staying for a handful of days you may want to consider this option. The metro system runs $2.50 per trip. So if you plan on making over five round-trips take our advice and buy the unlimited metro pass. You can buy it at any kiosk or with cash from a metro attendant. In case you are wondering if it’s safe, I think it is and they have cameras everywhere in there. Millions of people use it.

6. Download the App. There are plenty of apps that can help you navigate NYC. I downloaded the New York City Subway 24-hour Kick Map app; then there’s Time Out New York for events close to you, and Menu Pages for close menus and dining. There are other apps like Trip Advisor that are great. Research and download these apps before you get into the city. *Definitely download the Kick Map for subway navigation (the lite version is free).*

7. Dine and Drink Away from Times Square. If you are going to dine right in Times Square, expect to pay an arm and a leg. For example, we went to Guy Fieri’s American Kitchen in Times Square and a burger was $17.50. We spent almost $200 on drinks, food and a couple of snacks – that doesn’t have to be you.

For lunch one day I found an amazing Thai place in Hell’s Kitchen that had a special for $6.95. The same can be said for the bars too. Try to find bars with a happy hour. We found one called Reunion Bar and a majority of the menu was half-off from 5-8p. Nothing says “Welcome to New York” like stock piling a bunch of drinks five-minutes before happy hour ends.

8. Arrive Early. If you plan on flying to New York, I wouldn’t risk it coming in day-of. There are flight delays, ground stops and anything else that can delay you coming into the tri-state area. Nothing says “this sucks” than knowing your ship is sailing off into the deep blue while you’re stuck on a tarmac somewhere.

You can do New York City as a tourists and on a budget at the same time. It depends where you want to go, what you want to see and how you utilize the metro system. Those $10 here and $14 cab fares add up quickly. Do your research before you get there and you’ll be a lot better off.

Budget: Getting from JFK Airport into New York City

11 Cruise Tips Before Sail Away