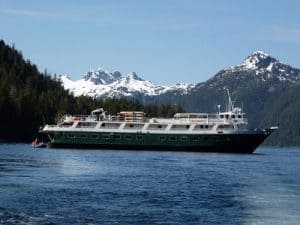 The Chuck West award is presented to a new pioneer in the industry who has exhibited entrepreneurial creativity, innovation and courage in the introduction of a successful new product for the benefit and enjoyment of Alaska’s visitors.
“It’s an honor to receive this award in the name of Chuck West, the ultimate adventurer and tourism pioneer in Alaska,” said Blanchard.

Chuck West, known as Mr. Alaska, discovered his love for Alaska as a bush pilot in 1945. He followed his dream of bringing tourists to see the beauty of the Great Land and led successful tourism businesses for the rest of his life.  Marguerite West, Chuck’s wife, established the funding for the award to honor her husband and his adventurous spirit.