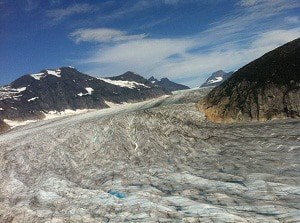 Historic tribal house to be rededicated

Chief Shakes Tribal House, a historic monument located on Shakes Island in the center of the downtown harbor in Wrangell, was recently renovated due to deteriorating conditions and is scheduled to be rededicated on May 3 and 4. Reconstructed as a replica of the original 19th century tribal house, the lodge was first dedicated in the 1940s. The 7,000-square-foot tribal house has been completely restored using traditional Tlingit carving methods and materials used by local carvers and laborers. The community is expecting more than 700 people to attend the rededication. The two-day celebration will include the tribal house rededication, a parade, canoe races and various community events. For more information on this event, go to www.shakesisland.com.

Timed in conjunction with the 100th anniversary of powered flight in Alaska, the Anchorage Museum unveiled a new exhibit, “Arctic Flight: A Century of Alaska Aviation.” The exhibit chronicles the pioneers of aviation, World War II flyers and modern day adventurers in Alaska. Co-curated with the Smithsonian Institution’s National Air and Space Museum, artifacts include footage from the first flight over the North Pole, military aviation uniforms and gear and a Stearman biplane brought to Alaska in 1928. The exhibit also looks at modern day aviation industry and what it’s like to be a bush pilot in Alaska today, demonstrating how airplanes have evolved from a spectacle to an important and crucial role in the way of life in Alaska. The exhibit runs until Aug. 11, 2013.

Fans of Bravo Media’s “Top Chef: Seattle” enjoyed a change of scenery during the Feb. 6 and Feb. 13 episodes that featured chef’testants battling it out Alaska-style in Juneau, leading up to the season finale. The cooking competition consists of 21 chefs from across the nation competing for the title of “Top Chef” through various cooking challenges. Filmed in and around Juneau, the chef’testants used many local agricultural and seafood products to create dishes highlighting Alaska fare. Challenges included creating a dish highlighting Alaska crab; cooking and serving a dish that combined Alaska salmon and sourdough for Juneau locals at a salmon bake; crafting a meal for Iditarod mushers at a dog mushing camp on nearby Norris Glacier; and showcasing a dish that inspired them to become a chef and serving it to Alaska Governor Sean Parnell. To learn more about the 10th season of the show, visit https://www.bravotv.com/top-chef.

Several airlines have announced new or increased domestic service to Alaska in 2013, allowing even more travelers to visit the Last Frontier. Virgin America is offering six, nonstop flights a week from San Francisco to Anchorage between June 6 and Sept. 9. Alaska Airlines has added two new flight options for domestic travelers – a nonstop, daily summer service between Fairbanks and Portland June 9 – Sept. 2; and a twice-daily flight between Seattle and Salt Lake City, running April 4 to May 31. Budget airline JetBlue recently added a daily Seattle to Anchorage flight route for the summer season. Fairbanks will also have a third major air carrier this summer with United Airlines’ plans for a seasonal nonstop service between Fairbanks and Denver, running June 7 through Aug. 27. Additionally, United Airlines will be adding a summer season nonstop flight between Anchorage and Newark on Saturdays between July 6 and Aug. 31. Earlier this year, Icelandair also announced direct flights from Reykjavik to Anchorage beginning in May, connecting Alaska to more than 20 European destinations.