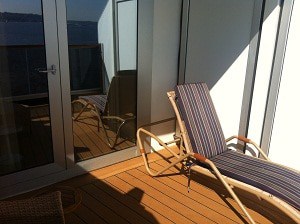 Sailing to The Last Frontier, just saying that sounds so cool. It became a reality when I was invited to experience a seven-night sailing to Alaska earlier this year. On this voyage we’ll be sailing through Tracy Arm followed by stopping in Juneau, Alaska; Sitka, Alaska; Ketchikan, Alaska and Victoria, British Columbia.

The flight over from Jacksonville wasn’t too bad – it was an hour up to Charlotte, North Carolina and then five and a half hours from to Seattle. We landed at noon Pacific time.

I did a pre-night stay in Seattle at the Sheraton Downtown and met up with a friend who took me out to some of the local must-sees. We went to check out the Pike Market, the Space Needle, ate at Anthony’s at Pier 66 and Tap House, a bar with over 160 local drafts on tap and reasonably priced.

The pier was a 10 minute drive from the hotel, we embarked at Pier 92. The cab ride was $13.75. I almost royally screwed up when I got out of the cab. I left my cell phone in the back seat when I was unloading my gear – I dropped my gear and went running – thank god the cab driver hadn’t left yet. Once again, I lucked out.

Embarkation was much different than any pier I’ve ever been to. There’s no tipping at the curb. If you have your luggage already tagged, you take it inside and they throw it on the conveyor belt and you head to embarkation, if you don’t have a bag tag, you go to the desk, a staff member checks the manifest and gives you a tag to put on your bag.
There were 26 check-in stations when you got to the embarkation area. Arriving to the pier around 1:00pm, I was expecting a long cue because that’s usually a prime to board – it wasn’t bad at all. We waited in line for probably fifteen minutes max. Having pre-registered online, I just had to show my passport, take a picture and give them my health questionnaire. From the embarkation desk to the ship was fast, under five minutes. There were just photographers waiting to take your picture, which I always pass and keep walk.

My first impression of the ship was – Wow, this is not what I expected, at all! I’ve said this time after time, and I still believe that Holland America has this misconception of being an “old person cruise line” but I don’t see it, on this sailing there’s particularly a lot of families and younger couples. It’s great to see such a mix of people. 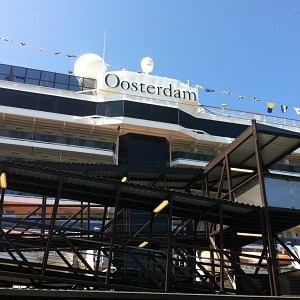 My stateroom is an aft balcony; I never knew aft rooms had such large balconies. Typical stateroom (see photo and video below) and there’s a bathtub in the bathroom which is nice. The room itself is just like my room aboard the ms Zuiderdam.

The safety drill was held at 3:15p and took 30 minutes from start to finish, a little longer than some of the other lines I’ve been on recently but they call out every cabin at the muster station. If you fail to go to the muster drill, they kick your butt off. The ship left at 4:00pm, we were second out, behind Norwegian Pearl and in front of Star Princess. Being from Florida, the whole snow and mountain thing is new to be and they were awesome views. It’s hard to believe that here we are in the middle of August, 85 degrees and there banks of the bay are still lined with snow-topped mountains. The views leaving the port of Seattle and until sunset were awesome.

I always thought that Seattle was really close to the Pacific Ocean, never have I been so long. This is my first time out west though – it’s going to be such an adventure!

Azamazement Started Before We Even Reached The Ship