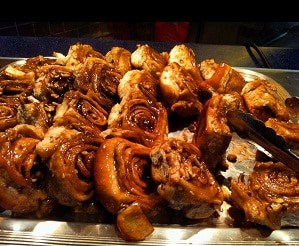 Before I went to bed last night I wound up putting the luggage outside my door, which is something I very rarely do but with all my gear and one person it had to be done. Around 7:30am I left my cabin after triple checking in to make sure I didn’t leave anything and went up to Lido (deck nine) to grab one last breakfast. Strawberry waffles and a gooey cinnamon roll. Breakfast of champions!

The first and final disembark announcement came at 7:15am. This was telling us that it would be a silent disembarkation and to pay attention to the time and come to the gangway when your time is up. My time was between 8-8:15, so I left the Lido at 8am and made my way down the elevators to deck three, I was shocked, no one was in line. The slow one was me because I didn’t have my ship card in my hand (I should know this by now). I made my way off the ship, down the gangway and into the Seattle Cruise Terminal where the bags were neatly laid out. I picked my bag up, gave the customs agent my blue customs form and showed my passport and I was on my way. I only had one person in front of me in the customs line. This was all too easy! 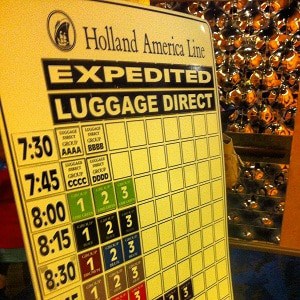 Don’t know if it’s just me but this year has been the best year for disembarkation. In all the cruises this year, I think I may have waited in one line to get off the ship and that wasn’t even long.

Once we got our bags we headed with the local tourism folks to check out the Boeing Plant and a couple of flight museums (more on that later). The Boeing Plant was cool and we got to see them test fly the new United 787. So awesome that they happened to be doing it that day!

It was located about 20 minutes Northwest of the city.

This entire Alaskan cruise was one for the books. All my life I’ve been told that you have to check out Alaska and to be honest, I was never overly thrilled about it but boy was I wrong! I’ll upload some pictures when I get back home. I took over 1,000 but not all of them or quality, I’ll work on the plane.

Video of Future of Flight museum  :