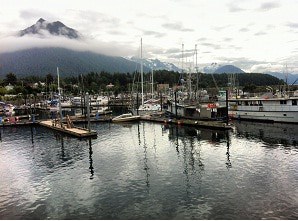 Sitka, Alaska, the first thing that comes to mind is the movie with Ryan Reynolds and Sandra Bullock, The Proposal. Although the movie wasn’t actually filmed in Sitka, it portrays the small town. Sitka was a tender port and we anchored about 1000 yards or so off the main pier.

Getting off the tender boat and walking around Sitka had a small village feel to it. Once you make your way up the ramp there’s a welcome center, public library, a couple blocks of shops and a harbor with a bunch of fishing boats.

I didn’t have an excursion in Sitka so when I got off the ship I went to work at an internet café, a coffee shop two blocks from the pier called The Highlighter, great brews of coffee and 90 minutes of complimentary internet for every purchase. This is actually Sitka’s only internet and email café (as they proudly boast).

Have a chance to talk to some of the locals, I asked what the best excursions were if you were coming to Sitka and they told me The Raptor Center, a four wheel drive excursion into the mountains and taking the local trolley that offers an all-day hop-on hop-off pass for $10.

A listener also told me you can’t go to Sitka without having a Halibut burger, so I tried one of those too. It’s beyond me why Halibut is so expensive when it’s caught right there. I asked a local why so much and he told me he’s been there all his life and he hasn’t figured it out either. Guess it’s a mystery that’ll never be solved. They had an awesome beer called a Raspberry Wheat draft beer that was awesome. I can’t remember the place I had the halibut burger but it was off the pier and had an outside deck – one of the only restaurants operated downtown with a view of the ship. It was in the Westmark Hotel. 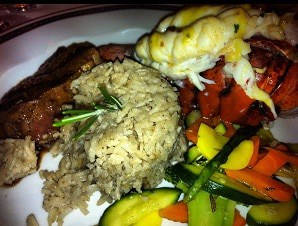 On board was formal night where we ate in the Visa Dining Room (main dining). We have “As You Wish” dining but generally all eat together as a group around 8ish. On the way into the main dining room you could see a bunch of water spouts off the starboard side of the ship and shore enough there was a school of humpback whales. You could hear the water spouts in the distance and it was remarkable. Of course as I stood there for five minutes when my camera out I couldn’t capture one of them!

Steak and Lobster was the surf and turf option tonight and they were fabulous. I had two plates – it’ll show later, trust me. Dessert was sugar free cheese cake (for me).

The buzz around the ship is that to comedians are really funny. I have yet to make it to a show past the welcome aboard show. Hope to do that tomorrow night.

Tomorrow is Ketchikan, Alaska where weather permitting I’ll be doing a seaplane and crab feast. I’m very excited about the excursion tomorrow but it’s an early start as I’m meeting at the Convention and Visitors Center around 7:15am to find out all about Ketchikan.