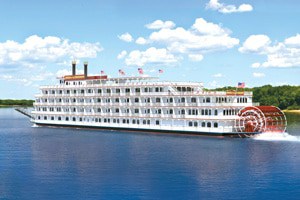 Queen of the Mississippi set for launch this year.

American Cruise Lines announced this morning the launch of their third new riverboat, much similar to the Queen of the Mississippi paddleboat being launched this summer.

“We recognize a considerable strength in river cruising and have observed an increased interest in our U.S. river cruises over the last several years,” said Charles A. Robertson, CEO of American Cruise Lines.

American Cruise Lines’ third new riverboat will feature a similar capacity to that of the Queen of the Mississippi and will also boast the most spacious staterooms in the industry, entirely private balconies – all with sliding glass doors, a center atrium with a grand staircase, various lounges and numerous amenities including:

As of yet, no decision has been made as to where the new riverboat will operate other than on U.S. rivers. Additional details and information will be announced in the coming months.