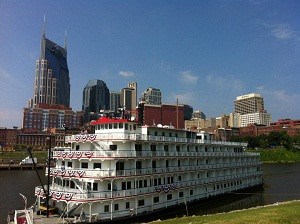 Queen of the Mississippi.

Columbia & Snake Rivers: In October of 1805, Lewis and Clark and the Corps of Discovery paddled down the Columbia River on the famous expedition into the West. Today, the autumn colors and migratory wildlife that Meriwether Lewis described in his famous journal are much the same aboard Queen of the West, as it follows their exact route. Autumn is the perfect time to relive the historic expedition and experience the Northwest’s rich tapestry of landscapes and fascinating human endeavors. Featured Dates: October 12, 26

Upper Mississippi River: Autumn time cruising on the Mississippi River is a spectacular time to experience the American Heartland. The upper portion of the river features stunning scenery and quaint historic rivertowns. Guests will take a relaxing journey aboard the elegant Queen of the Mississippi, their minds wandering back in time on this authentic riverboat, as they glide by the colorful display of changing foliage and take in the breathtaking views around every bend of the river. Featured Dates: October 19, 26

Hudson River Fall Foliage: Surrounded by the Catskill Mountains on the western shore and the Taconic and Berkshire Hills to the east, the Hudson is rich in both history and beauty. This popular cruise showcases the bright changing colors and towering mountains for which the Hudson River Valley is so well known. The cities and towns along the way feature some of the most magnificent architecture in America. Featured Dates: October 19, 25

Puget Sound & San Juan Islands: Guests will leave relaxed and rejuvenated after eight days enjoying the delicious crisp autumn air of Puget Sound and the San Juan Islands. In autumn, clear skies and sparkling water offer a powerful contrast with the colorful coast where nestled between Canada’s Vancouver Island and the U.S. mainland are hundreds of islands that are home to a diverse natural wonderland filled with wildlife. Featured Dates: October 12, 19