American Safari Cruises announced that they recently purchased an 86-guest small ship to add to their three yacht fleet to be put into service next summer in Southeast Alaska. 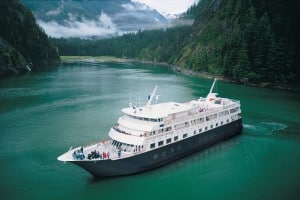 According to a press release released by the company. “An extensive renovation project will add American Safari Cruises’ exceptional comfort and refined atmosphere on board. The guest capacity of the yacht-style ship will be reduced 16% from 102 to 86 guests with a mix of twin (some convertible) and king beds. Five stateroom categories include three Master, 21 Commander, 12 Captain, three Admiral and four Commodore Suites. The suites will be created by merging two former staterooms and adding new step-out balconies.  All staterooms have one or two outside view windows. Other amenities being added to the ship include two massage rooms, two hot tubs, sauna, exercise equipment, wine bar and a library. An all-American crew of 34 will ensure attentive service with a guest-crew ratio of 2.5 to 1.”

“This is an ideal time to expand our fleet,” said Dan Blanchard, principal and chief executive officer.  “In our 14-year history, our occupancy rates have never been higher, and we are seeing an increase in demand for the type of small-group adventure travel we offer.”.

Based in Seattle, American Safari Cruises specializes in adventure cruising letting passengers be as active as they want.