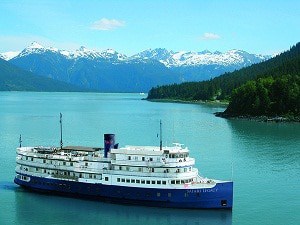 Small ship cruise line American Safari Cruises announced today that their rolling out new voyages in Southeast Alaska next year to include the Columbia and Snake Rivers aboard Safari Legacy.

After significant renovations and upgrades, the replica Victorian steamer, Safari Legacy, will sail two 11-night cruises between Seattle and Juneau, AK departing August 11 and August 22, 2013. In fall and spring, the new 88-guest Safari Legacy will sail weeklong cruises on the Columbia and Snake Rivers roundtrip Portland, OR.

In summer 2014, it returns to Alaska for a full season of weeklong cruises between Juneau and Ketchikan, AK.

Heritage Adventures in Alaska and along the Columbia and Snake Rivers bring history to life with an innovative Living History program on board and ashore.

Safari Legacy cruises include entry fees to museums, national parks and preserves, all onboard meals, fine wine, premium spirits and microbrews, and a complimentary massage.

Prices on these sailings start at $3,195 per person.