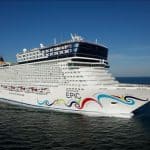 Norwegian Cruise Line launched another one of their popular “Freestyle Dash” sales until Friday, August 24, 2012 on a variety of sailings around the globe.

Norwegian Freestyle Dash fares include Hawaii sailings on Pride of America for $1,199, European itineraries for $549, sailings out of NYC for $429 and the popular three or four-night sailings on Norwegian Sky out of Miami for as low as $169.

All fares are per person and based on double occupancy.