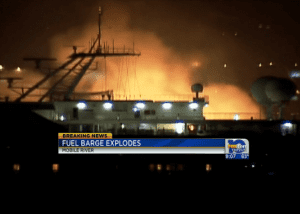 Three people were hurt last night as a barge transporting thousands of gallons of fuel burst into flames on the east side of the Mobile River, this according to a local Alabama newspaper.

The barge explosion could not be extinguished and was left to burn itself out. Local businesses and operations in the area were requested to evacuate.

According to the Mobile Fire-Rescue twitter feed, “Units on scene on east side of Mobile River where a fuel barge has exploded and is on fire. BAE (shipyard facility) is sheltering in place. Part of Austal has been evacuated. A fourth explosion has occurred. Planning to let it burn. Still too unstable.”

Carnival Cruise Lines’  Carnival Triumph is currently being repaired in the BAE shipyard and was reported to be evacuated as a safety precaution.