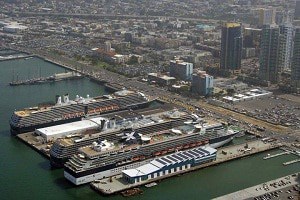 The cruise season is officially underway for the Port of San Diego and they had some great visitors kicking off the 2012 season.

The following ships called in San Diego this past week:

The 2012-2013 cruise ship season began on September 21, when the Disney Wonder made the first of four stops in San Diego. The season will end May 16, 2013. About 79 cruise ships with more than 250,000 passengers are scheduled this cruise season.

The Port of San Diego is the third largest cruise port in California.