Budget: Getting from JFK Airport into New York City 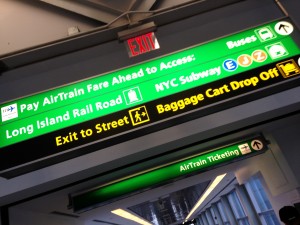 Recently we took a trip on Norwegian Breakaway, which departed from Pier 88 at the Manhattan Cruise Terminal. To get to and from JFK airport and into the city in a taxi is a flat rate of $52 plus any tolls and MTA fees. That can add up once you include the tip.

You may want to consider using the metro when you head into Manhattan, whether is be the cruise pier, exploring the city or a hotel. The ride into the city is very simple if you know what you’re doing.

The AirTrain is JFK airport’s tram system that runs you between terminals and offsite location Jamaica Station. The train on this line also stops at Federal Circle Station, where you can pick up rental cars and hotel shuttles.

Once you arrive into baggage claim at JFK, look for the signs that say AirTrain. You can pick it up from any terminal and take it to Jamaica Station. You do not need to buy a ticket until you step off the train and step foot into Jamaica Station. The cost is $5.00, which you can buy directly from a kiosk or at an agent at the station.

Once you arrive at Jamaica Station you have a couple of options with the metro pass to get you to the subway and into NYC. They have a single ride pass for $2.75 or an unlimited 7-day pass for $30. Keep in mind there is a one-time $1 fee when you buy the card so if you are going back to the airport after your cruise or spending a couple days in the city just make sure you hang onto your card and do the reload option.

To get into Manhattan you’ll want to go downstairs and take the E subway line into the city. The ride from Jamaica Station to the city takes about 30-minutes but goes by really quick.

One you get on the main street, you can head to a taxi stand or walk to the cruise pier or hotel. Keep in mind – depending on the street your hotel is on – it maybe easier to get off a stop earlier and walk up a couple of blocks.

In our case the InterContinental New York Times Square was connected to the subway stop. You’ll want to research these things before hand. We didn’t realize it and took a cab around the city block – in one big circle!

This was my first experience on the NYC metro system from the airport (first time at JFK airport too) and I thought it was going to be very overwhelming. It wasn’t at all and was a great learning experience. There are plenty of free smartphone apps like Kick Map, maps, signage in the terminal and attendants who’ll be more than happy to assist you.

Send this to a friend
Hi, this may be of interest to you: Budget: Getting from JFK Airport into New York City. This is the link: https://cruiseradio.net/budget-getting-from-jfk-airport-into-new-york-city/