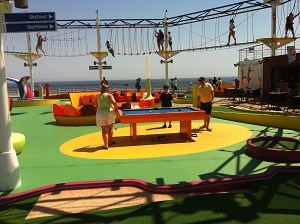 When I woke up this morning we were pulling into Palma de Mallorca, Spain. I didn’t opt for an excursion on this island but chose to walk it by foot. There was a five euro shuttle bus available into downtown if you didn’t want to walk. The walk into town takes about thirty minutes and lots of people did it. Great exercise.

The bus dropped us off at right at the downtown area.  Right across street where we were dropped off from there was that famous cathedral that has been around since the 1200’s. There was an abundance of sidewalk cafes, trendy stores and souvenir stores. I stayed in town for a few hours, had a couple beers at a sidewalk café and headed back to the shuttle. Soon as we boarded the shuttle it left to take us back. Great timing.

Went to The Punchliner Comedy Club presented by George Lopez after dinner in the main dining room. The club is located in the Limelight Theater and had a packed house. A lot of people thought the comedians were hysterical. In my opinion if a comedian has to use the F bomb every other word or talk super vulgar, it’s a lost cause. The comedians were Smiley Joe Wiley from Las Vegas and Jason Blanchard from Toronto (we saw them in the Punchliner Comedy Brunch earlier the week). Didn’t Bill Cosby teach comedians anything? 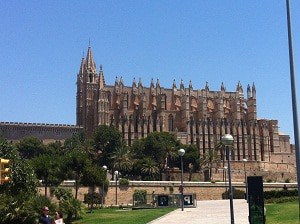 Someone asked on the Cruise Radio Facebook page about the Seaside Theater on Carnival Breeze and when it was used. It’s used quite frequently throughout the voyage. Every sea day John Heald has a morning show or afternoon show with assistant Calvin, that’s shown on the big screen as well in the evenings they have a family movie nights at 7pm and 9pm. They also broadcast the Miami Heat earlier in the week at like 3 am our time. Aside from ship programming they show concerts and the pool area activities live feed on there.

What shocks me is  no matter where you’re sitting or how bright the sun is, you can see the screen from anywhere. Princess Cruises was the first  ship to put a seaside theater type venue on the open deck.

Tomorrow we disembark in Barcelona, Spain, where we started the journey 12-days ago.