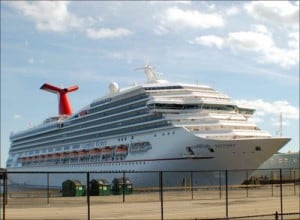 Earlier this week we reported about Royal Caribbean leaving 145 passengers behind because the San Juan port authority was closing the port and making all the ships evacuate due to Hurricane Irene. For the passengers that missed Serenade of the Seas, it was a bitter ending, having to get their own hotel cost and airfare, if they didn’t book airfare with the cruise line.

This incident happened the same day but a different ending. Carnival Victory was scheduled for a 7-night Caribbean cruise on Sunday that has a scheduled departure time of 10pm. Instead it was required that they too depart at 6pm because of Hurricane Irene, adding to the number of stranded passengers.

A company spokesman said, “For those who were unable to board the Carnival Victory, Carnival provided a complimentary two-night hotel stay in San Juan and complimentary air transportation to Barbados to join the ship.”

Unlike passengers who were on the Royal Caribbean ship, Carnival offered passengers hotel and air if they booked airfare through the cruise line or not.

Any cruise passenger that didn’t have the passport was unable to proceed to Barbados and was giving a future cruise credit for the cruise amount they paid.

This is another reason why you should travel with a passport and travel insurance.