As a member of the media, every time a cruise ship goes through a refurbishment I get to head to the port and check it out. Recently, the Miami based Carnival Cruise Lines’ ship the ‘Fascination’ underwent a $34 million dollar renovation as part of Carnival’s “Evaluations of Fun” upgrades. The ‘Fascination’ currently operates out of Jacksonville, Florida on 4 and 5 day sailings. The ship is Jacksonville’s only year around cruise. 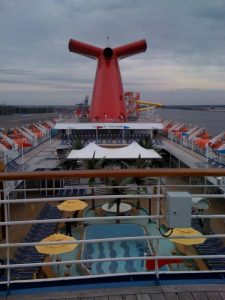 Some of the features that were added were:

Serenity (Adults Only): You guessed it, no kids allowed! This is in the aft part of the ship and is a paradise just to escape. There are a couple of hot tubs, a sea of comfortable deck chairs, a drink service station, shade and servers waiting on you hand and foot.

Dining: A couple new features were added to the poolside cafe called the Coconut Grove Bar and Grill. Talking to a staff member we were told that the dining area was fitted with new tables, buffet area’s, floors, fixtures and a Mongolian WOK grill station was added.

Aqua Park: On the back of the ship a water park area was added that now has a 300′ yellow Twister slide, two 82′ racing slides and a splash zone for the kids.

Balcony Rooms: 98 rooms were fitted with balconies during the renovation stint. I found it amazing that they could retrofit a ship to add so many balconies, most rooms being aft of the ship. A lot of the ship’s room amenities were replaced too. One replacement I noticed in the room was the TVs went from your standard television to flat screens.

Overall the ship is in good condition but my personal feeling is that it will be one of the next to go. The ship is almost 20 years old and with so many ships being released with state of the art features, these older boats may not be the next best thing to some cruisers.