Carnival Cruise Line has confirmed that Carnival Horizon will be one of the first ships to welcome passengers back when cruising resumes.

With that in mind, we offer up this photo-filled guide featuring everything you need to know about the ship. 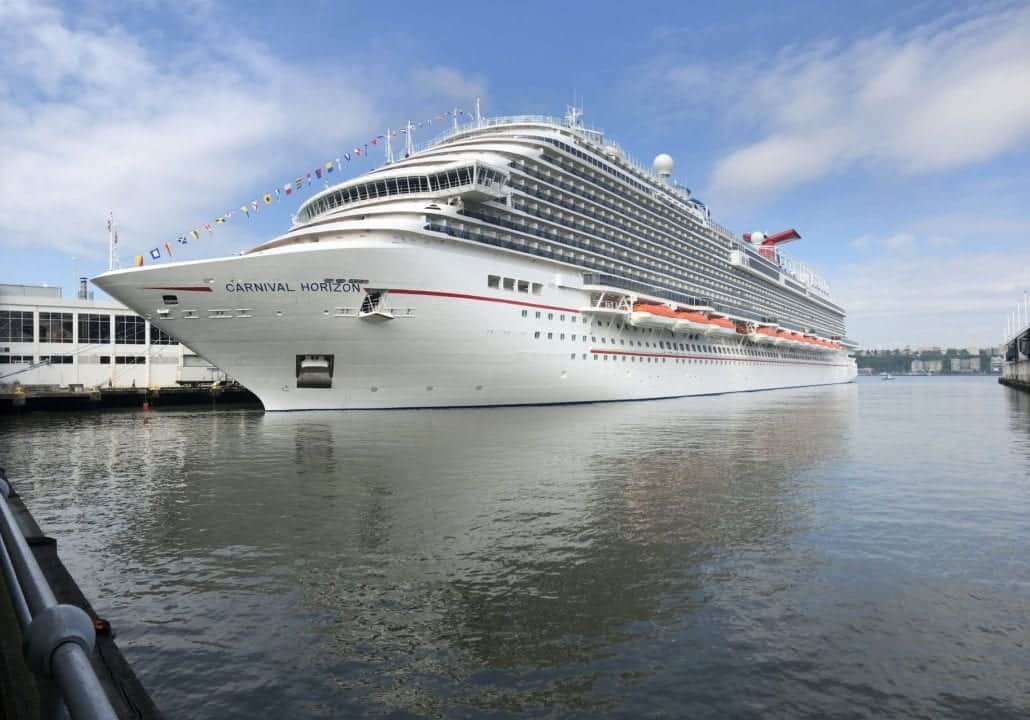 Whether you’re here because you’re thinking about booking your first voyage on Carnival Horizon or you’re just wanting to relive memories of the time you spent on board, we’re pretty sure you’ll love this photo-filled gallery as well as the tips and tidbits we’ll share along the way. 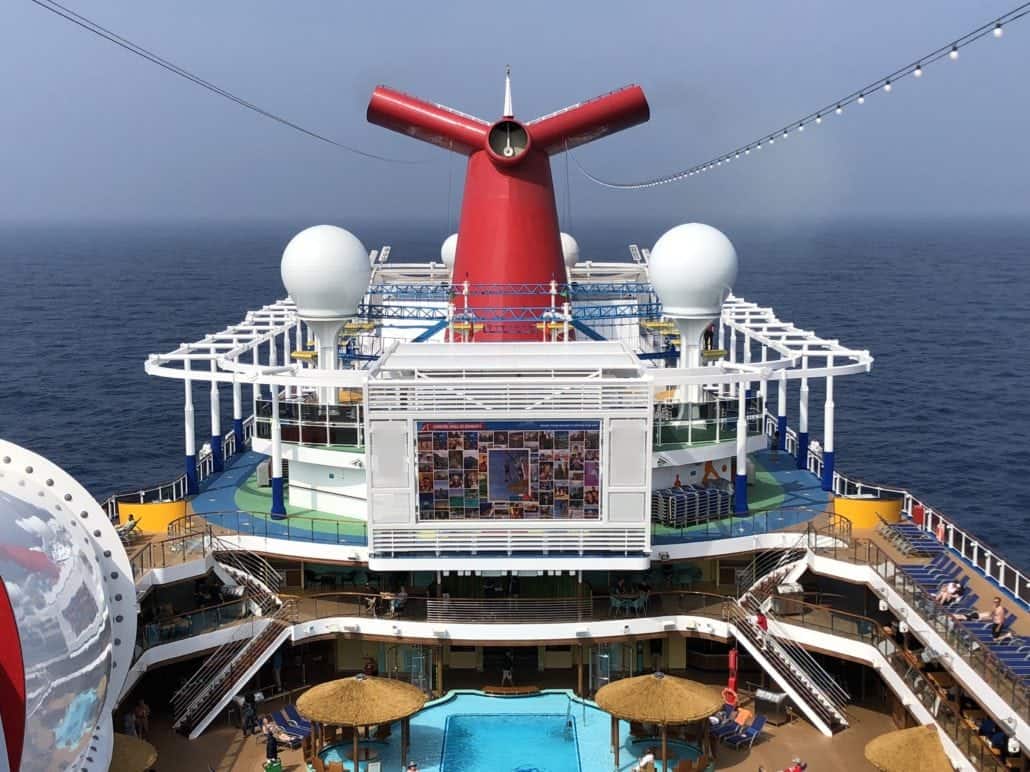 Horizon, which joined the fleet in 2017,  is what you might call the middle child of the Vista-class. She was preceded by the Carnival Vista in 2016 and followed in 2019 by Carnival Panorama.

While on the surface the ships appear pretty similar, look closer and you’ll find that — as with even the closest of siblings — each has traits that distinguish it from the others. 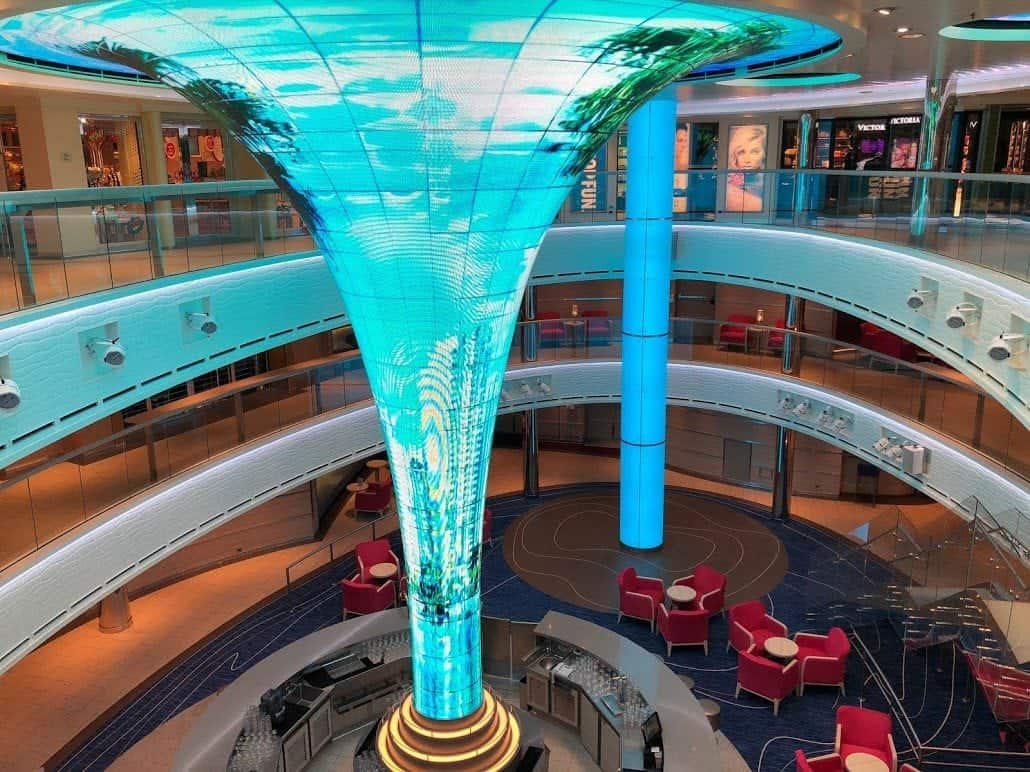 Like most Carnival ships, Horizon passengers enter via the atrium, where — unless they’re incredibly jaded — they’re blown away by the towering Dreamscape, an ever-changing cyclonic LED screen.

There’s a second, smaller Dreamscape anchoring the casino, but it’s the atrium’s display which captivates the attention.

Famed Carnival designer Joe Farcus was a big believer that a ship’s atrium, tasked as it is with making a first impression, should wow each person coming aboard, and this one certainly lives up to that huge responsibility. 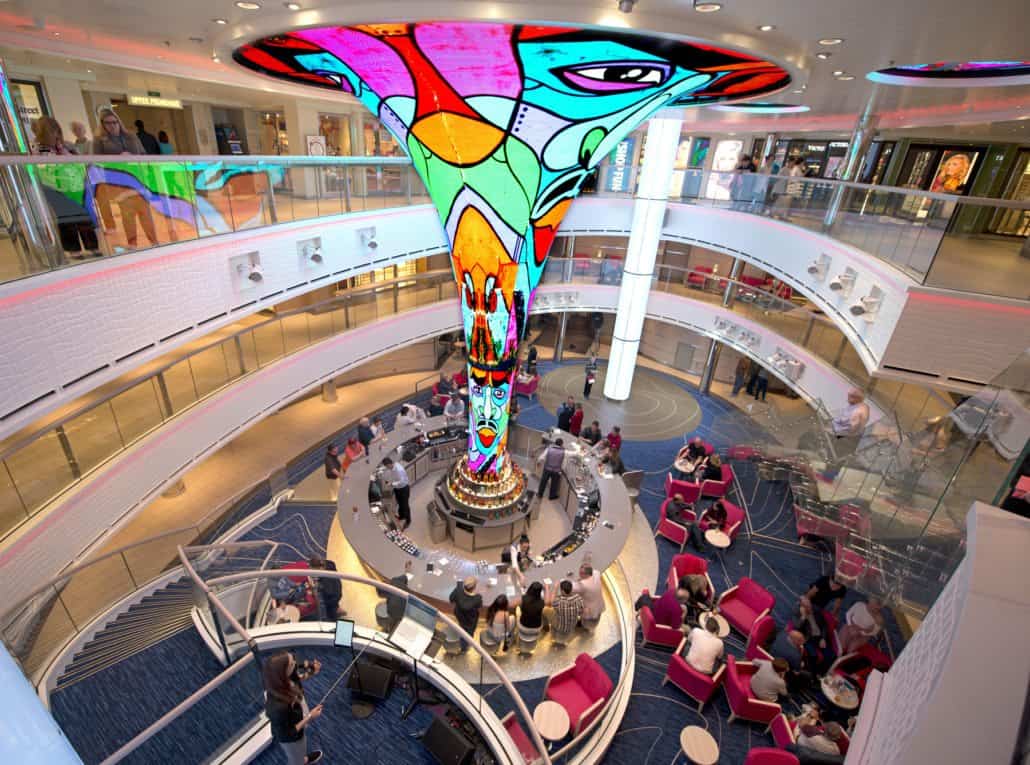 The Dreamscape acts almost like a giant mood ring, able to instantly change the feeling of the space it occupies.

One moment, it might feature designs inspired by famous artwork only to moments later take on the appearance of a three-story aquarium, complete with fish seeming to swim through swaying seagrass. 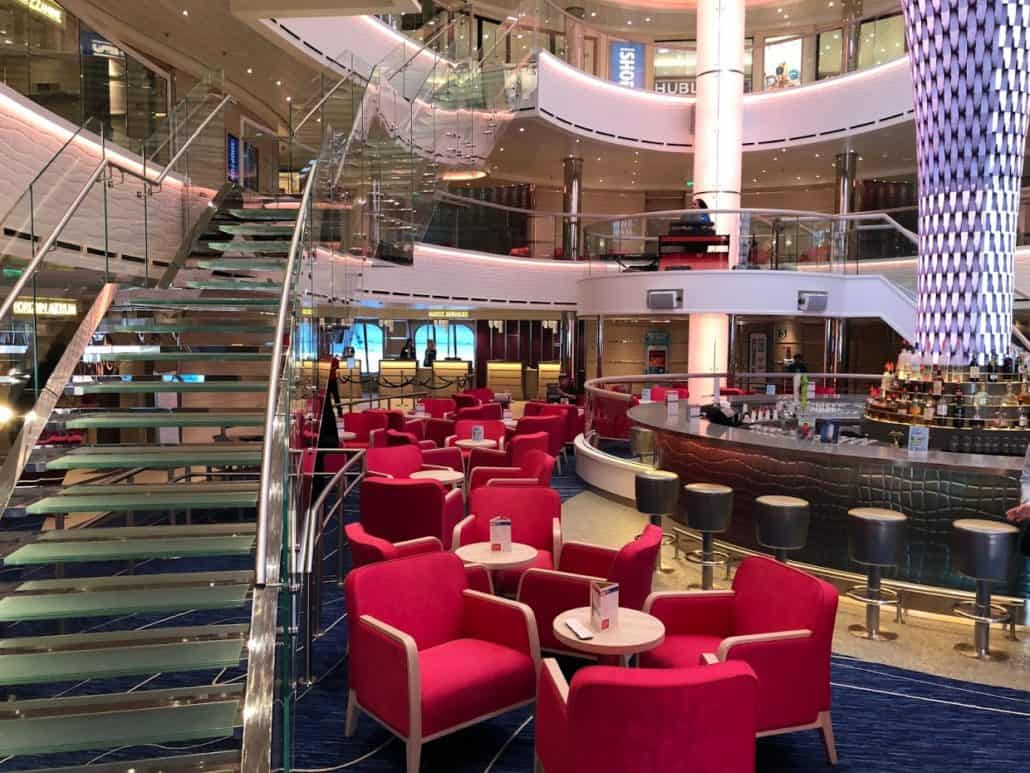 The atrium is, of course, the beating heart of the ship. Depending on your point of view, all roads lead to — or perhaps from — this central hub. It’s also, at various times, an entertainment center.

The small balcony on the space’s second level often plays host to acts ranging from DJ’s to the popular string trios who perform most nights for those grabbing a pre-dinner cocktail. 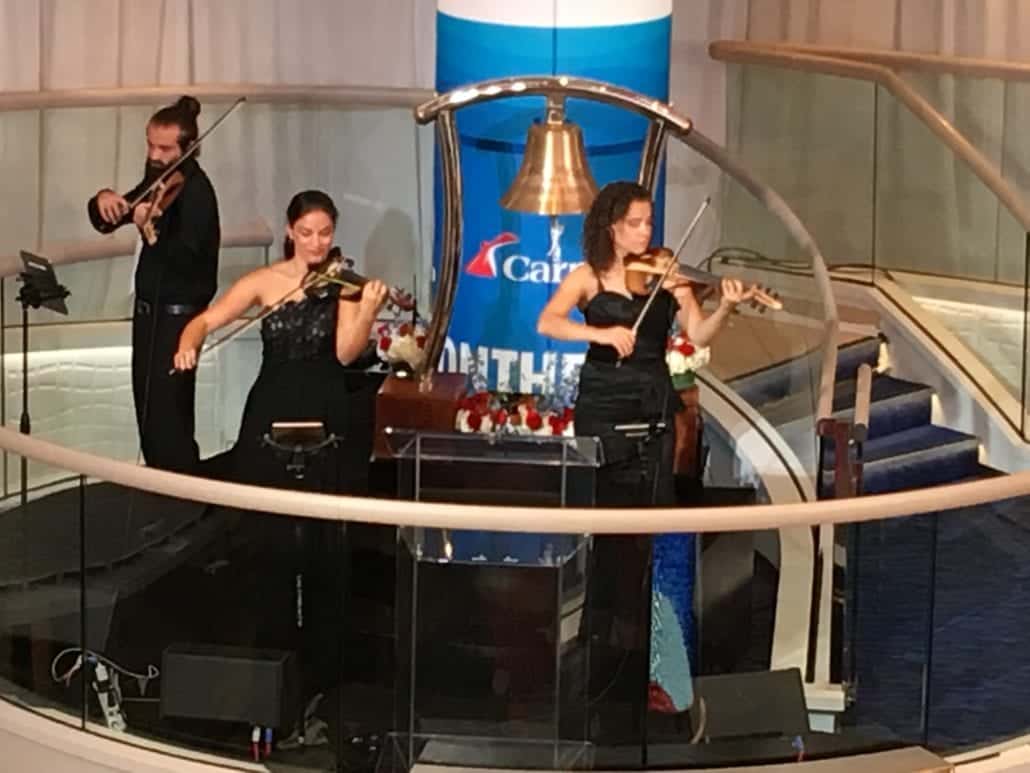 Speaking of strings, Horizon plays host to one of the most unique shows you’ll find on a Carnival ship. Celestial Strings combines some of pop’s most rocking anthems with classical instruments to create a fantastic experience that has to be seen — or maybe heard — to be believed. 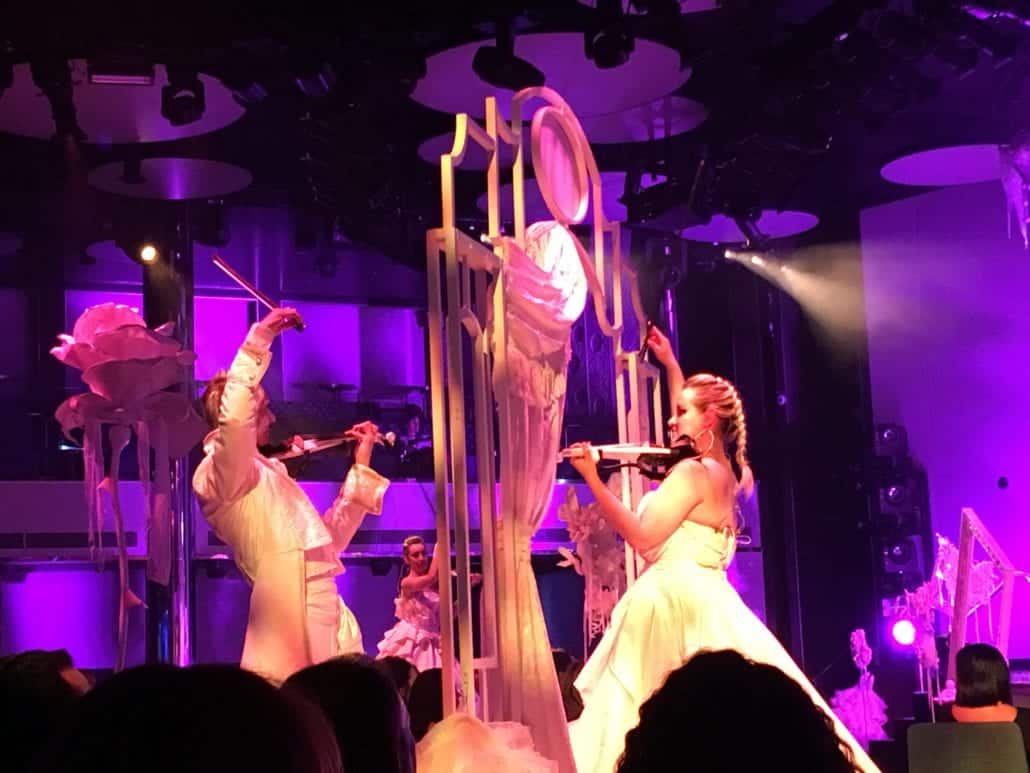 Equally eye-popping is another of the line’s Playlist Productions, Soulbound. Combining eye-popping effects and spooky costumes, the jukebox musical takes guests on a journey through the haunted environs of New Orleans.

But we’ve spent enough time inside! One of the reasons we cruise is to sit and stare at the ocean, whether from our private balcony or perhaps one of the many outdoor public spaces. 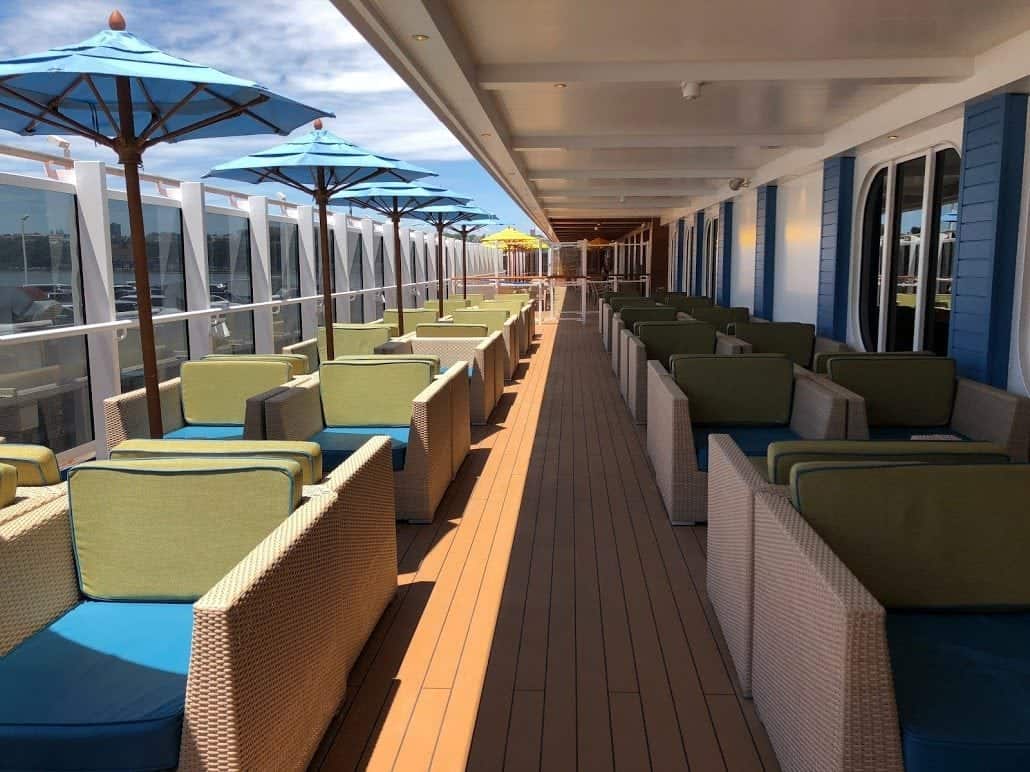 In keeping with the ship’s prime directive of connecting all who sail upon her to the sea, Horizon features a slew of outdoor seating areas.

Sure, you can sit by the pool and soak up the sun, but those looking for something a bit quieter might enjoy one of the outdoor restaurants, bars, or lounging areas which can be found all around the ship. 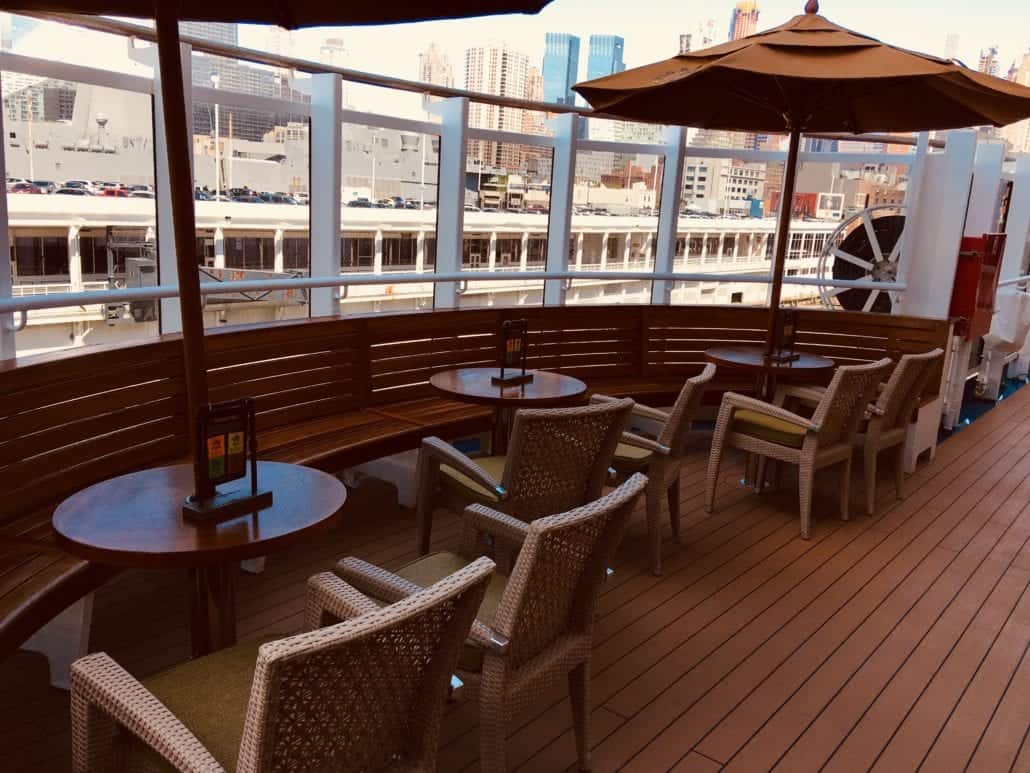 Of course, those looking for something a tad more adventurous can head up to the WaterWorks area, which happens to feature the characters made famous in the works of Dr. Seuss. How fun are the slides and other wet-and-wild features found here? Even the Grinch is smiling, so… enough said? 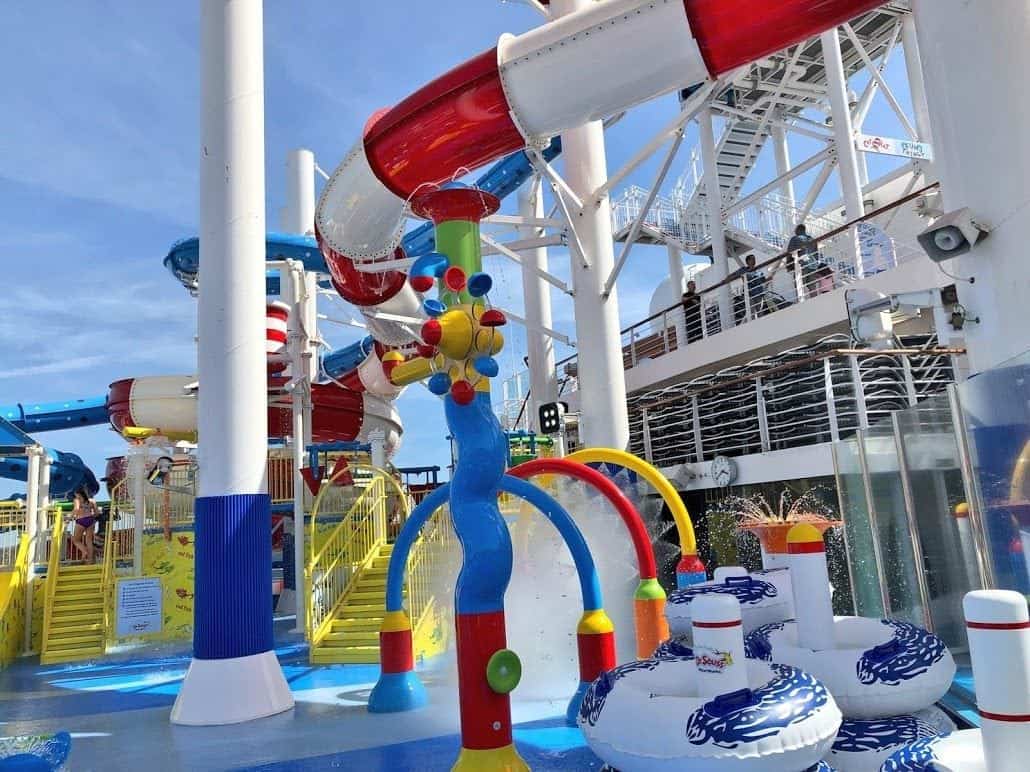 Those looking to take their cruise to new heights — pun intended — can hit the ropes course or one of the most unique attractions at sea, the SkyRide. Oft described as a “bicycle in the sky,” the high-flying, self-propelled course is… well, exactly that!

The cars are similar to recumbent bikes you might see in the gym, although those won’t offer a view even close to the one you’ll experience from high above a cruise ship while sailing through the ocean! 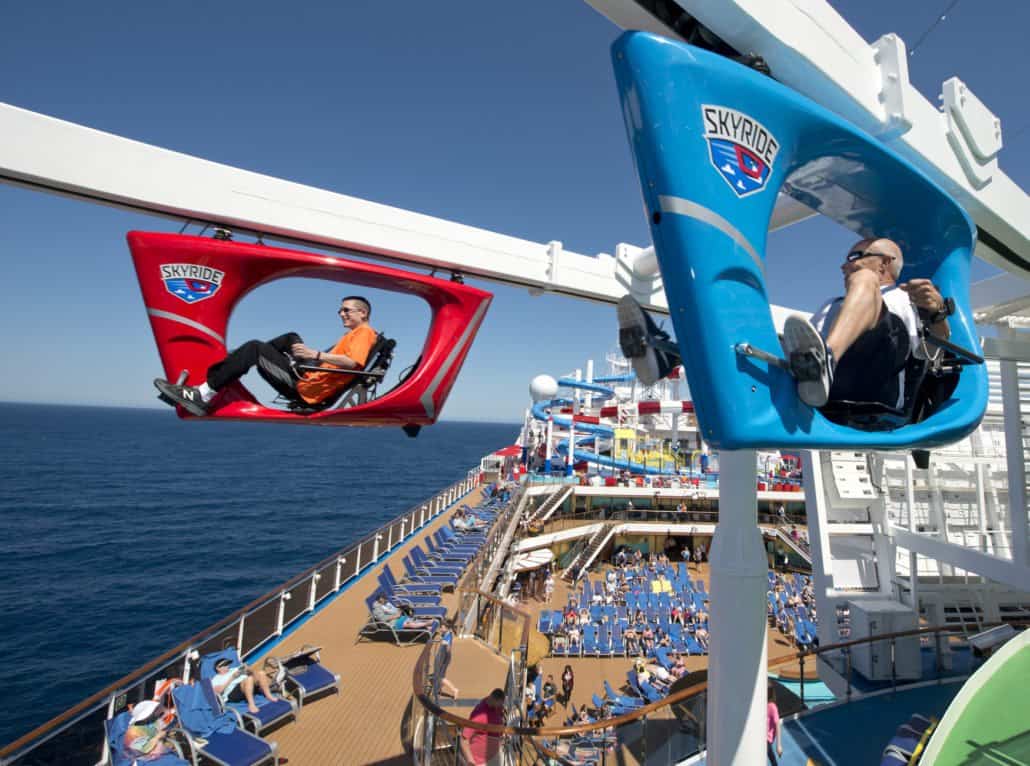 Of course, there’s also the lido deck where you’ll find two pools, several hot tubs, and some of the most popular venues aboard any Carnival ship. That’s right, this is where to head when you’re craving one of those famous Guy’s burgers or maybe a drink from the RedFrog Rum Bar.

But no words can convey the actual feeling of being on the lido deck, so why not watch the video below, then we’ll meet up on the other side and continue to explore the ship.

Ready to move on? Another favorite spot on the Carnival Horizon is the Havana Bar. Like several other public spaces on this ship, the Havana Bar totally transforms itself from a quiet place to relax during the day to a ridiculously hot spot to dance the night away.

The entranceway of the space proudly displays its Cuban influences while offering a variety of comfy areas in which to sit and read or play games during the day.

But once the sun sets? Well, don’t even think about coming into the Havana Bar unless you’re wearing dancing shoes. You know that joint you hear so much about? The one that’s always jumping?

Well, this is it. There’s usually a live (and loud) band, and they keep the energy high while the bartenders keep the cocktails flowing. 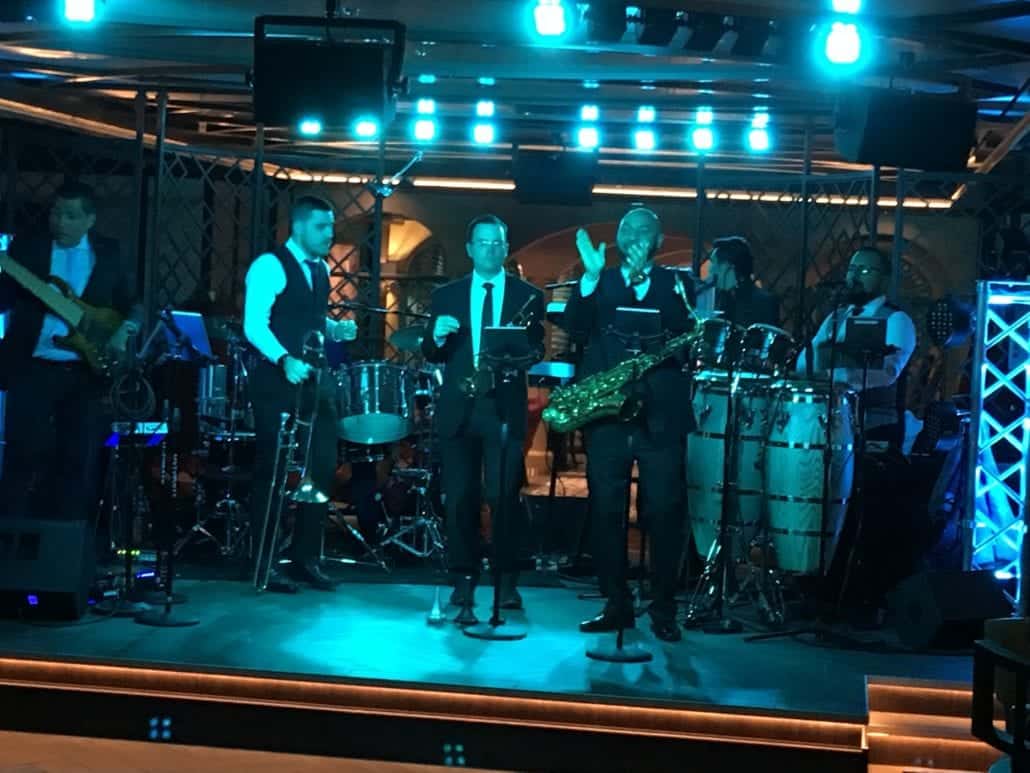 As you may have guessed by now, live music is around every corner on the Carnival Horizon. Sometimes, you’ll even find it in unexpected places. For example, let’s say you find yourself hungering for something off a Guy Fieri-cultivated menu, but not one of the burgers served poolside. So instead, you head to Flavortown… aka Guy Fieri’s Pig & Anchor Bar-B-Que Smokehouse|Brewhouse. 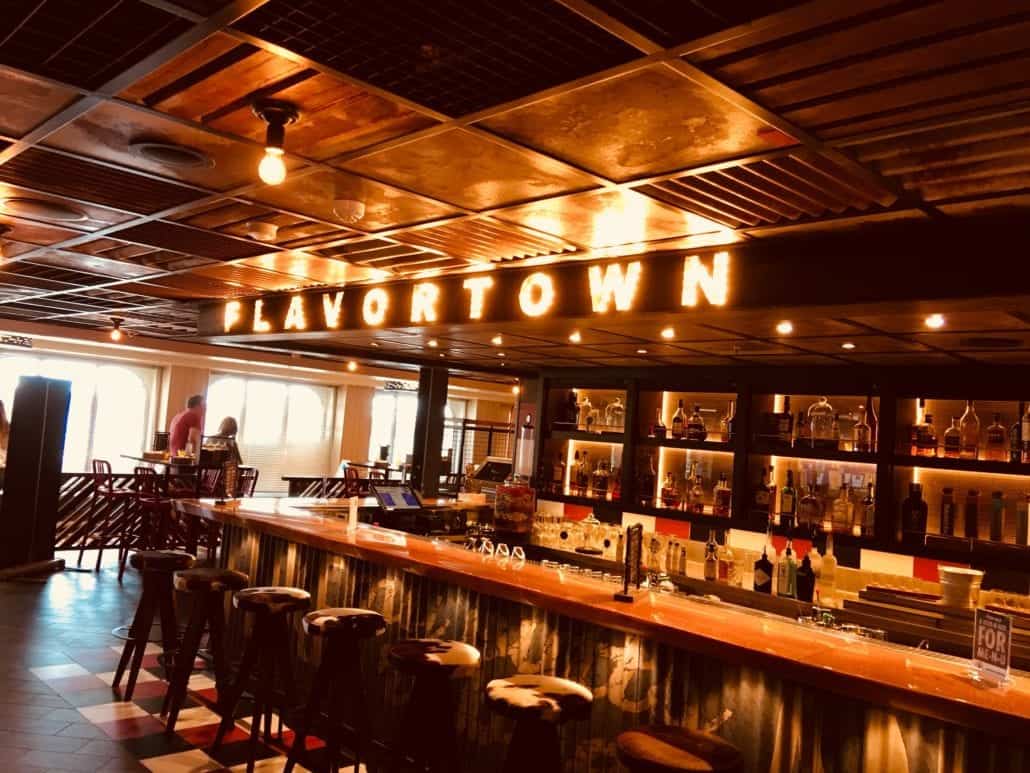 As you might expect, you’ll find a slew of great munchies here, including everything from trash-can nachos (trust us, they taste better than they sound!) to cedar plank salmon and, of course, ribs.

There’s also a wide variety of beers, including several which are brewed right there on board the ship. By now, you’re probably so busy salivating that you forgot our original topic wasn’t food, but rather music. And sure enough, there in the corner is a guy strumming the guitar and singing while you’re deciding whether or not to order a second Parched Pig Toasted Almond Ale. 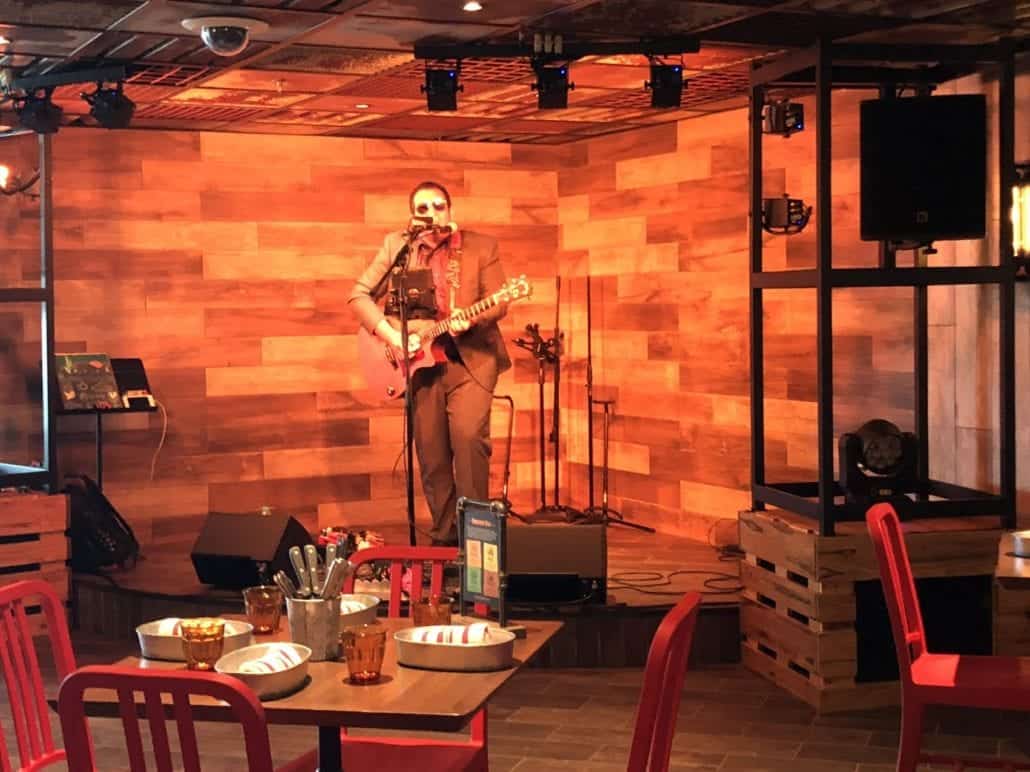 Yet another spot to take in some live music is Piano Bar 88. There you’ll find, as the name suggests, a talented person tickling the ivories, taking requests and encouraging even those who probably shouldn’t sing along to do exactly that. 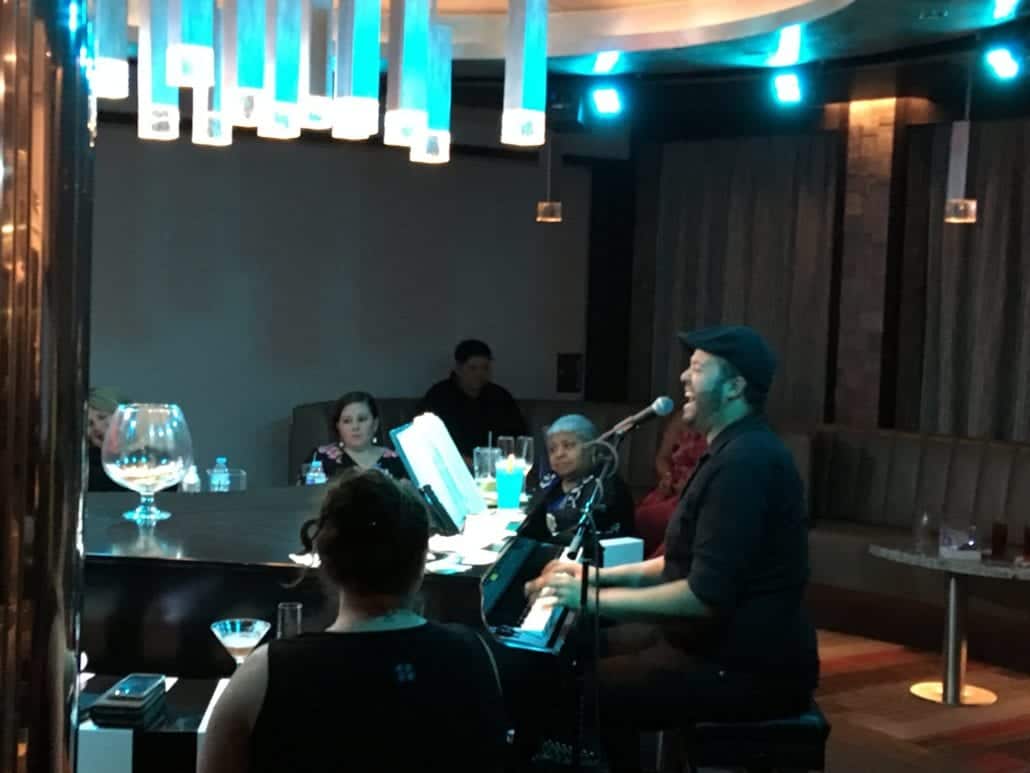 By far the most unique cocktail spot on Carnival Horizon, as on most of the ships in the fleet, is the Alchemy Bar. This isn’t the place to go if you want a beer or a glass of wine.

Ask for those, and you’ll be politely directed to one of the other drinking establishments on board. The Alchemy Bar is all about the cocktails as whipped up by expert mixologists.

The menu can be a little overwhelming — and the drinks more than a little potent — so if you’re looking for sort of an entry-level Alchemy Bar drink, ask for the Cucumber Sunrise. You can thank us later. 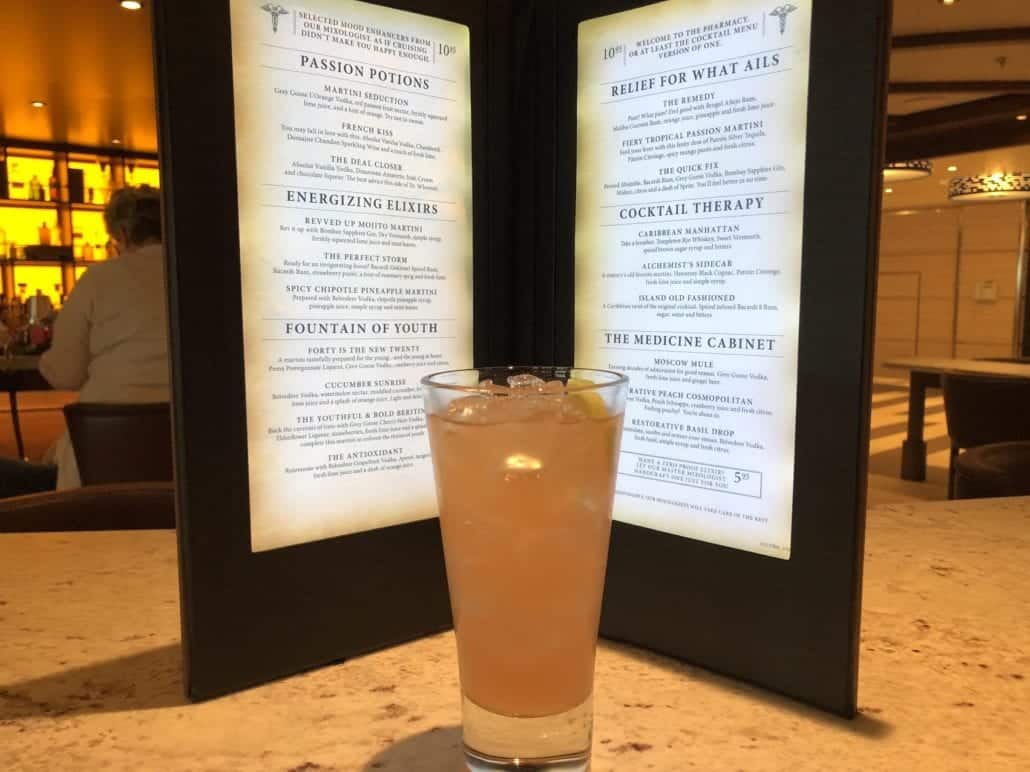 Those looking to take their vacation to the next level can book a Havana stateroom, thus granting them exclusive access to the Havana Retreat. Located just beyond the Havana Bar, the Retreat is an oasis that is only available for guests staying in Havana staterooms. It features a private bar, hot tubs, pool, and some of the comfiest areas you’ll find anywhere on the ship.

While there was a time that this area was open to all guests after 7 p.m., that has since changed. Now, it is the exclusive domain — day and night — of Havana guests who are paying a premium for the privilege. 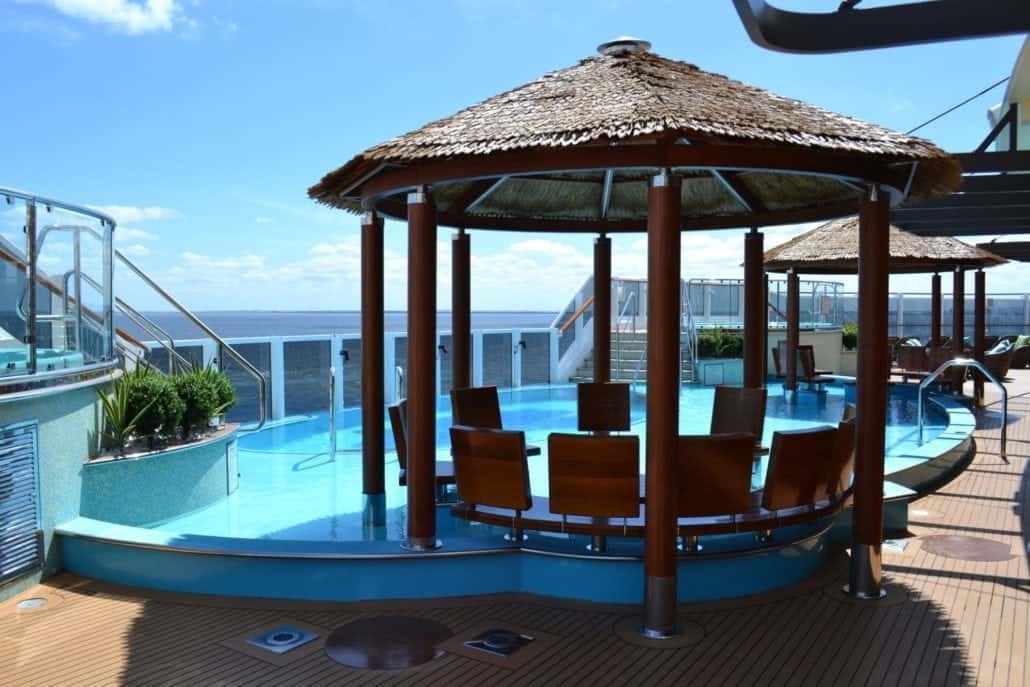 Want to see a bit more of what Carnival Horizon has to offer? Click the video below for a deck-by-deck tour of the ship, including the adults-only Serenity Deck, casino and much more.