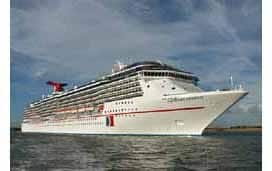 The 2,124-passenger Carnival Legend will launch a variety of European cruises in 2013, which will include the lines first Norwegian fjords itinerary and sailings from the UK, also offering Mediterranean and British isle cruises.

Carnival Legend will sail 12-day voyages to Norway, British isles, and Baltic departing from Dover, along with 12-day Med cruises departing from Venice, Barcelona, and Dover, offering a total of 17 cruises, visiting 34 ports, and 18 countries from April 22 and October 31, 2013.

To kick the season off, Carnival Legend will offer a 15-day transatlantic crossing to Barcelona on April 7, 2012 and offer the same at the end of the season.

After the ships European run, she’ll be home ported back in Tampa,Florida. During the European deployment, there will not be a seven-day ship in Tampa but three and four- day service will continue on Carnival Paradise.

Carnival Legend departed Harwich, England, on its inaugural cruise in 2002.

Costa Atlantica: At Sea + Moment of Silence for Costa Concordia