It was May 1, when Carnival debuted their signature ale-like beer ‘ThirstyFrog Red’ aboard Carnival Magic in Venice, Italy. 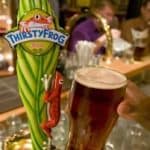 Since then, the ale has become so popular that it was moved to 14 ships in the fleet and recently announced going to 18 Fun Ships total.

The ships that will not be serving ThirstyFrog Red are some of the Fantasy-class ships: Carnival Fantasy, Carnival Ecstasy, Carnival Sensation, Carnival Fascination, and Carnival Inspiration. Could it be because the older ships aren’t set up for draught beer?

Below is a video we taped aboard a Fun Ship over the weekend.