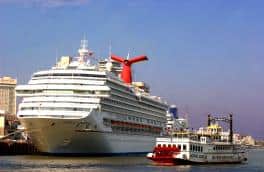 The Port of New Orleans recently announced that Carnival Cruise Lines renewed a three-year berthing agreement with the port. The renewal will keep the line in the port through 2016, and also includes the option of two one-year extensions.

“Carnival Cruise Lines currently carries 340,000 passengers annually from the Port of New Orleans, which consistently ranks as one of the most popular homeports among our guests,” said Gerry Cahill, Carnival’s president and CEO. “This agreement builds upon our outstanding relationship with the Port and the New Orleans community and we look forward to continuing to sail from such a highly rated and attractive homeport,” he added.

Video: Nassau, Bahamas in a Nutshell