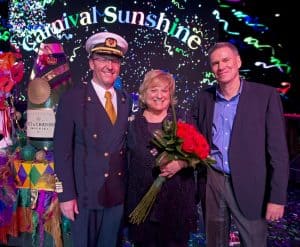 At a dockside ceremony following a win of the New Orleans Saints, godmother Lin Arison christened Carnival Sunshine in the Liquid Lounge on Sunday night aboard the cruise ship in New Orleans. Philanthropist Lin Arison is the widow of the Ted Arison, founder of Carnival Cruise Lines, who previously served as the godmother to Carnival Destiny, the worlds largest cruise ship in 1996.

During the ceremony, Carnival made a donation of $25,000 each to YoungArts and the New World Symphony, both of which are organizations founded by Ted and Lin Arison and dedicated to supporting young artists.

Carnival Sunshine, previously Carnival Destiny, rolled out this summer after an extensive $155-million drydock and is now in her homeport of New Orleans.

Carnival Sunshine offers all the branded Fun Ship 2.0 like:

Hear our broadcast aboard Carnival Sunshine this summer here.