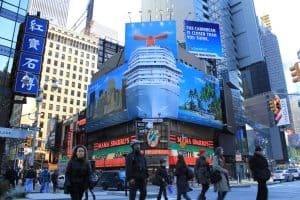 You can see the billboard on the corner of Broadway and 49th Street (pictured right).

A smaller billboard with the words “The Caribbean Is Closer Than You Think – Cruising from Midtown” — is also featured.