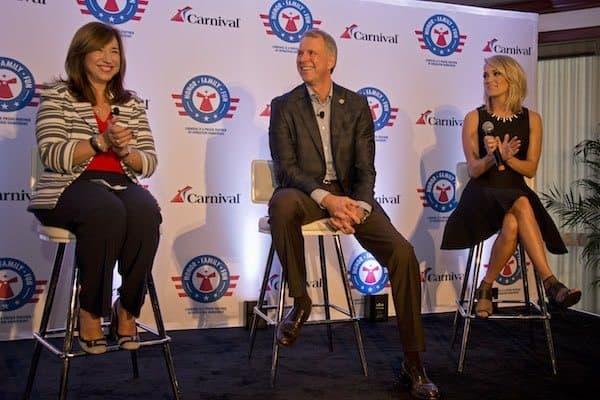 Today, Carnival Cruise Line announced a partnership with Carrie Underwood and representatives of Operation Homefront, the nonprofit that comes alongside and supports military families.  The program, called Honor. Family. Fun. will help raise funds for the organization and culminate in a pier side concert for service men and women and their families.  The show will be held on the new Carnival Vista when the ship makes its US debut in New York City on November 4, the final stop of Carrie’s tour.

In ten cities along the course of Underwood’s The Storyteller Tour, select military families will be treated to meet and greets before her concerts.  A video series about the meet and greets and the families’ stories will be featured on Carnival’s website.

Fans of Carrie Underwood and the program will have an opportunity to donate by clicking on the button on carnival.com/honorfamilyfun.  Commemorative dog tags will be available for purchase during the tour, as well as on board the fleet of Carnival ships with all the proceeds going to Operation Homefront.

In the near future, Carnival will launch a new military appreciation program onboard their ships.  Each ship will hold a special event honoring active and retired military personnel and their families.