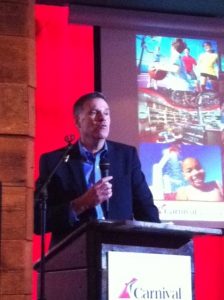 Today at the Hudson Terrace in New York City, Carnival Cruise Lines announced $500 million dollars worth of enhancements spanning through 2015.

John Heald, who came over from Carnival Magic just to emcee the event was in high spirits and very passionate about the brand and the announcements.

The first guest of honor was CEO of Carnival Cruise Line’s, Gerry Cahill. He kicked things off talking about what factors drive Carnival. He mentioned his favorite new space on the Carnival ships is the water park. “Fun Ship 2.0 builds on the success of Carnival Magic’s new branded experiences,” said Cahill.

For added dining , TV personality and Celebrity Chef Guy Fieri has joined forces with Carnival to bring Guy’s Burger Joint. Guests will have the their choice of homemade burgers made with choice ground beef and complimented with hand-cut fries. This will be a lunch or dinner option for guests, topped off with their own condiment bar. Also added will be a new Cantina with Mexican delights like to order burritos and tacos. All complimentary.

Carnival is giving bars at sea a new name. Carnival partnered with sports video game company EA SPORTS to bring an interactive sports bar at sea. Not only will there be tournaments and trivia but 16 46-inch big screen TV’s and a 24/7 live sports ticker. To expand on the ever-so-popular Red Frog Pub that was introduced on Carnival Magic, Carnival will be adding Red Frog Rum Pub and BlueIguana Tequila Bar. For the folks that are cruising to heal their sorrows, Carnival is adding an Alchemy Bar where passengers will create their own drinks on a prescription pad. The Library Bar will be added also, being coined “an intimate cocktail lounge.”

Carnival is taking entertainment to the next level with Playlist Productions, 30-minute shows with LEDs, special effects, and sing alongs. Teaming up with game leader Hasbro, Inc. to create interactive game shows at seas. Also Carnival is teaming up with DJ Irie and creating Spin’iversity for folks who want to learn to mix music.

The first ship to roll out will be Carnival Liberty, followed by other ships during the next couple years. You can get the entire fleet schedule here.