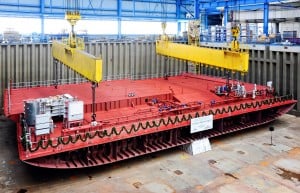 The 500-ton block measuring 66-ft by 118-ft was lifted into the building dock with an 800-ton crane, and commemoratively placed on a collection of coins, consistent with tradition.

Celebrity Reflection is set to hold more than 3,000-passengers and have one more additional deck than the other Solstice-class ships.

This is the tenth ship built for Celebrity Cruises by Meyer Werft, costing an estimated $750-million.

Florida to see its share of cruise ships this winter