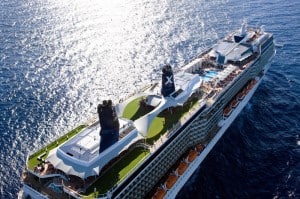 Known for their fine dining, amazing on-board restaurants, and cuisine, Celebrity Cruises will add another chef to the kitchen. It was announced today that they the cruise line is naming John Suley, as its director of Culinary Operations.

Tapped by Celebrity’s charismatic Vice President of Culinary Operations Jacques Van Staden – himself a James Beard-nominated Master Chef – Suley is widely regarded as one of the country’s top “up and coming” chefs. Prior to joining Celebrity, he worked in the star-studded, international dining scene as executive chef at the South Florida incarnation of three-time James Beard honoree Alfred Portale’s famed “Gotham Bar & Grill” (New York), “Gotham Steak” at the chic Fontainebleau Hotel in Miami.

John Suley is known for his edgy and innovative cooking style, and is a genuinely unique chef,” said Van Staden, “Having known him for 12 years, and observing the amazing contributions he made during the recent debut of our newest Solstice Class ship, Celebrity Silhouette, I am confident he will be an inspirational and creative leader within Celebrity’s innovative culinary team, and will make tremendous contributions as we continue to prove to vacationers around the world that we can treat them to a dining experience that is easily comparable to the best on land.”