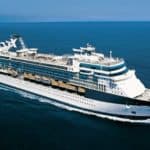 On August 8, Celebrity Millennium experienced an electrical problem with one of two propulsion motors, resulting in a delayed arrival in Seward, Alaska today. The intricate repairs required to restore power to the motor will take several days. As a result, the ship, which was scheduled to begin another 7-night cruise August 9 from Seward to Vancouver, British Columbia, must remain in port in Seward until Tuesday, August 13, when we estimate that we will be able to then depart directly for Vancouver, with a scheduled arrival time of 7 am on August 16.

The cruise line is offering a variety of compensation packages for affected passengers.