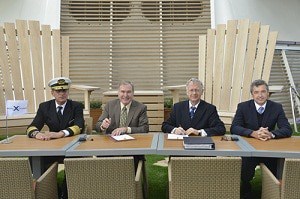 Celebrity Reflection will present a two-night promotional cruise for an invitation-only audience of European press and travel partners October 10-12, ending in Amsterdam. The ship then sets sail on a series of Mediterranean sailings before crossing the Atlantic to begin the ship’s first Caribbean season. Celebrity Reflection will be named December 1 in Miami, with four Godmothers – all of them employees of the company whose lives have been touched by breast cancer – presiding over the ceremony.

Celebrity Reflection is the fifth and final Solstice-class ship.

Send this to a friend
Hi, this may be of interest to you: Celebrity Reflection Officially Handed Over. This is the link: https://cruiseradio.net/celebrity-reflection-officially-handed-over/