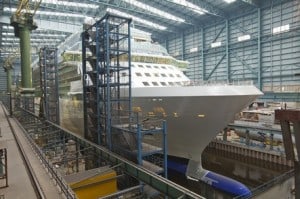 The float out will begin at 7:30am, assisted by tugs, and berthed dockside by 9:30am. Then a crane will put the signal mast in place, which will be installed after the docking. Several tests and trials will take place on board all day. In the evening the two funnels are supposed to be mounted.

Before sea trials can begin, Celebrity Reflection will have to be towed down EMS River into Dollart Bay. Sea-trials are set to begin September 16-18, and then delivered to Celebrity Cruises. The first sailing is from Amsterdam to Barcelona.

The 126,000-ton Celebrity Reflection is 957’ and will carry more than 3,030-guests. She is the only ship among her four sisters that has 16 decks rather than 15, which increases the number of cabins by another 72, and provides more space in the theater and in the restaurants.

Celebrity Reflection will spend the first couple voyages in the Mediterranean, then a 13-nt transatlantic cruise before repositioning to Miami for seven-night Eastern Caribbean sailings.

Send this to a friend
Hi, this may be of interest to you: Celebrity Reflection Set for Float-out. This is the link: https://cruiseradio.net/celebrity-reflection-set-for-float-out/