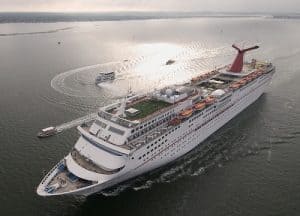 City Council voted 8-3 in favor of Mayor Joe Riley’s ordinance, which does not alter or place limitations on the cruise business in Charleston. Rather, the measure reinforces the Ports Authority’s voluntary cruise management plan and outlines the City’s process to seek input from citizens should conditions change in the future.

“This is a vote of confidence in our managing of the cruise business, which is a natural extension of our state-mandated maritime commerce mission,” said Jim Newsome, president and CEO of the Ports Authority. “Cruises are putting our community to work at a time when jobs are needed.”

Last fall, Council unanimously voted in favor of a resolution in support of the Ports Authority’s Union Pier Concept Plan, which includes a new cruise terminal currently in the design phase as well as the redevelopment of 35 acres of waterfront property in downtown Charleston.

Charleston’s Board of Architectural Review unanimously gave the new cruise terminal’s design conceptual approval in August of this year.