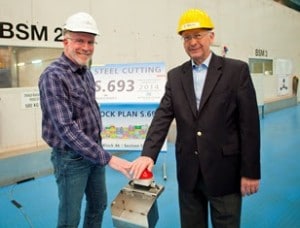 Before a ship can float, it has to be built and like every structure, a ship too, needs a foundation. Today at a German shipyard, Norwegian Cruise Line cut the steel for their upcoming Norwegian Escape, one of two upcoming Breakaway Plus Class ships.

“Norwegian Escape will be the largest ship in our fleet and will continue our legacy of innovation,” said Kevin Sheehan, Norwegian’s chief executive officer.  “Cutting the first piece of steel for Norwegian Escape marks the official start of construction for this remarkable ship. We are eagerly anticipating her delivery in October of 2015.”

It was announced earlier this month at Cruise Shipping Miami that the 4,200-guest Escape will be homeported year-round in Miami, Florida. The cruise line also announced that famed marine wildlife artist and champion of ocean conservation Guy Harvey has designed the ship’s signature hull artwork which features an underwater scene of marine wildlife.

While we wait for more details to be revealed about Norwegian Escape, you can hear our interview with Guy Harvey here.

Carnival Places Ship in Virginia for 2015