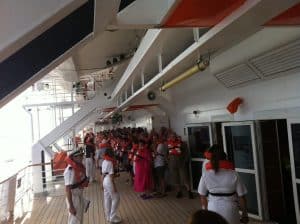 Our second life boat drill on the 10-day sailing.

This ship has been rocking and rolling for the past 24-hours and it’s really starting to mess my equilibrium up. I pretty much stayed in my cabin for the whole day with the exception of the lifeboat drill and dinner.  I was just that dizzy. After being in my cabin all day, I’d hate to be a person on whatever ship that has Norovirus and confined to their room. Talk about cabin fever!

It turns out when a ship is at sea for 7-days or more, they must conduct two lifeboat drills during the voyage. That’s not Costa Cruises law but from SOLAS (Safety of Life at Sea rules). The drill was just like embarkation day. We went down to our muster station, stood and line, and heard the safety drill in five different languages.

The did announce about Super Bingo today. It kept going up and the higher the jackpot rose, the more excited Cruise Director Max got. Pretty funny stuff. I think by the end of the day it was well over $1,000 in the jackpot.

We had a moment of silence for the victims of Costa Concordia, Captain Viscafe said it was being done fleet-wide. If you’d like to hear how it went, you can see the video at the end of this. After the 60-seconds of silence, we were dismissed by the ships horn. A lot of people stopped to pay their respects and a lot of people didn’t have a clue what was going on. 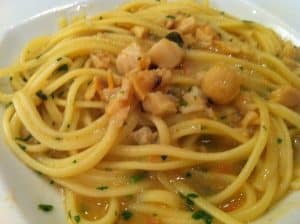 One of guys who sits at our table today and invited a bunch of us to join him for his birthday celebration at the early dining (6:15p) but because I wasn’t feeling good I just went to the regular dinner at 9p. No one was at our table so I sat alone but the servers were really talkative. I went with rosemary roasted chicken, ceaser salad, and an awesome clam/scallop linguine dish. The food has been pretty good and people seem to enjoy the entrees.

After dinner I went down and signed up for early embarkation in Miami. You can do ‘self-assist’ if you want to carry your own bags off. I signed up and they gave me a black baggage tag. Not sure why because it says we have to handle our own luggage. I’m always skeptical of checking my luggage. I’ve traveled too many times and have seen people accidently walk off with luggage that looks like theirs.

Tomorrow is Roatan and we have to set our clocks back one hour to get into the Central time zone. We’ve actually been sailing in the Central zone all day but I guess to make it uniform they ask everyone to do it at once.

At 3:30am we will sail between the islands of Guanja, visible on the left and Barbareta on the right. At 6:30am we will be in close proximity to the Roatan port, and at 7:00am the pilot will embark and aid us in docking procedures.

Video from Moment of Silence:

Carnival Legend heads to Europe in 2013