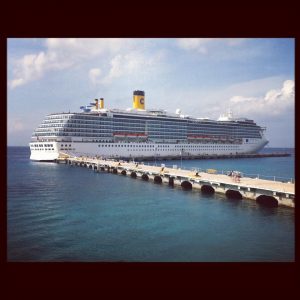 We arrived into Cozumel around 7:30 this morning and docked with the starboard side to the pier, meaning my view was looking to the mainland of Mexico (you can get there by a ferry). We’re in port until 7p so we have a good 10-hours to explore. Disembarkation in Cozumel was quick with two gangways set up. I was off the ship and walking around the Punta Langosta pier by 8:15, which is the downtown area. My first stop was Starbucks to get some coffee and internet. It’s not like a typical Starbucks wifi hotspot because you have to actually make a purchase and then the code is printed on the receipt. I’ve been to that location quite a few times and I don’t think the password ever changed. Usually if you sail on a Royal Caribbean brand or Carnival Cruise Lines you will dock down at the other terminal (about a $5 cab fare away or 30-minute walk).

Some folks at our table were asking me some good places to go to just chill in Cozumel that wasn’t expensive and that had all-inclusive options so I sent them to the El Cid resort. Another couple bought a two-hour dive right down the street from the pier for $70. They seemed pretty pleased with the dive that took them 10 meters to an artificial reef and were amazed on how clear the water is in Cozumel.

I went and checked out a local place next to Margaritaville for lunch. Don’t get me wrong because I think that Jimmy Buffett is a marketing genius but good gosh, who wants to pay $12 for a burger?! The place next door was called Jeanie’s (a rather American name for an authentic Mexican joint). I went with the beef fajitas. It was a nice view on the beach and a lot of couples were dining out on the patio. I got to talking to a couple from Carnival Inspiration and a couple who was honeymooning for a week at a resort. Both really enjoyed the island. That was about my extent of Cozumel and I headed back to the ship around 6p for an all-aboard time of 6:30 but not before catching a photo of the sunset from the seawall.

Back on the ship there was a Costa Club party where free cocktails were handed out and light snacks. This one gentleman who was on the ship had 667 days at sea with Costa. He was an older gentleman but that’s a lot of sea days no matter how old you are. What’s that, like almost two years?! The entertainment was dancing from the ships singers and dancers and everyone was keen to it. A lot of clapping.

Dinner was formal attire (which not a lot of people dressed up for) and they had lamb shank, fried shrimp, honey-roasted duck, and some other dishes. Everyone at the table got a little of everything and it was all great food. I can say I haven’t had a bad meal this whole cruise. Going back to formal night dress for a second, I think you will start to see that going away and being less enforced. Out of the dozens of cruises I’ve been on I’ve only saw attire enforced on one cruise line, Celebrity. The 2012 cruiser just doesn’t want to dress up to eat a meal if they don’t want to. I talked to a lot of passengers this week and they all had the same consensus. We will see though because I set sail on Holland America on Friday.

After dinner I watched one of my table mates play in the casino, lose his money, and walk off. We dropped by the disco for a few minutes. It was dead. There just isn’t a disco crowd on this sailing; you could tell the DJ was ready for a crowd. We probably brought about 10 people in there.

At around 7:30 will exit the seaport of Cozumel. The ship will take a northern route and behind its navigation across the island of Cozumel, and the eastern coast of the Yucatan peninsula. At around 10:30p we will catch our last glimpse of the Yucatan and turn towards Miami.