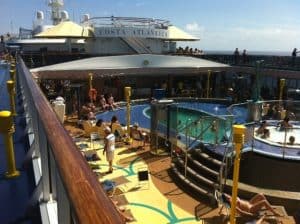 Day at sea aboard Costa Atlantica.

I started out the day going to the gym around 8a, and it was packed! I waited a few minutes for a machine and then finally just went to the jogging track. The gym isn’t small either.

There was a welcome back reception at 11am with the Captain and it lasted for about an hour. They put on a nice spread with food and drinks for the return cruise passengers and I met the English hostess who helped me out with my dining situation. Since I ate by myself the previous night, she moved me to a table with folks who actually come to dinner.

There was a few pool games and a Rustic Buffet on the pool deck which was interesting to watch.

Before dinner was the Captain’s Cocktail reception. Lots of drinks and food. The captain came in about thirty minutes into it and gave a welcome speech in a couple different languages. Dinner was at 9p ( I switched from early to late dining). I went with a salad, beef, and a cheese plate for dessert. A lot of people weren’t dressed up for formal night, much different from other sailings I’ve been on over the years. The singers and dancers were really great though.

The after dinner show was called “Circle of Life.” The first thing I thought of was the Lion King and I wasn’t too far off, they sang the Elton John song during the performance. It was a typical cruise line song and dance. 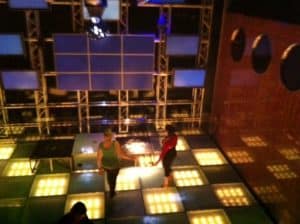 The show lasted about 30-minutes then we went to the disco for a few minutes. The disco is two stories with a spiral staircase right in the middle.

Tomorrow is Grand Turk. Days at sea aren’t my favorite. I like being on land and exploring and I know some would argue that point.