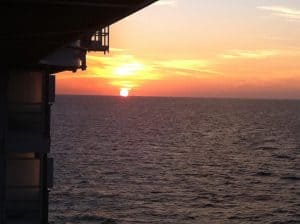 For being our day at sea, we had great weather and were able to just chill out the whole day. A lot of people on the ship were lying out in the sun, while others spent the day indoors after having baked in the sun for the past 10-days.

At 10:30 I had an interview with the Hotel Director, Stefano, who answered some questions about operations on board the ship and being in the North American market seasonally. Turns out he was a cruise director and has been around for the past 17 ship launches. I’m pretty sure they thought I was on the ship doing an undercover investigation on Costa Concordia because all my questions had to be vetted.

Around the ship there was lots of games, music, and one last day for the servers to push drinks. Late afternoon I went down to the guest relations office to make sure everything was taken care of and the line was about 20 people deep.

It’s always interesting on the last day watching people complain about their bill and trying to explain to the staff that there’s no way they spent these charges. I’m sure they heard it all by now. From what I gathered, US residents had the option to remove the daily hotel service charge and pay with cash, but anyone else couldn’t, the charge was mandatory. I removed my service charge and got envelopes from the front desk and did the cash thing. I’ll definitely have to get back with you on that.

The disembarkation talk has  been on TV all day. I have a black luggage tag, which means I’m doing self assist, the only way I go (until I get too lazy). I have to meet in the lounge at 7:30am tomorrow morning.

Dinner was fun and it Roman themed. They passed out togas for everyone to wear but because I didn’t ask for one, I didn’t get one. The guys at our table dressed up, actually about 50% of the dining room was dressed up. I’m definitely calling it an early night tonight because of the early morning. As I type this we are off the coast of Florida, probably about 10-miles or so. A lot the European folks aren’t flying out until 11pm on debarkation day so that’s going to make a long day in Miami. Luckily Costa lets people stay in the public areas of the ship til like 11:30, I don’t know of a place to store luggage in Miami airport. My guess is they wouldn’t have that after 9/11, but I don’t fly enough to know.

Viking River Cruises: Day 1 + getting to the ship