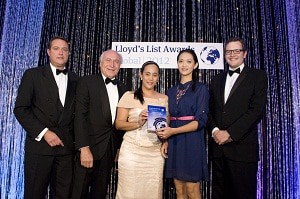 Accepting the Lloyd’s Seafarer of the Year 2012 Award on behalf of the crew of Costa Concordia.

Costa Concordia crew members were recently named Seafarer of the Year by Lloyd’s Register of Ships at the Lloyd’s List Global Awards 2012. The awards are given in 14 categories and selected by a panel of 10 shipping experts.

Lloyd’s List editors wrote: “When the cruise ship Costa Concordia struck a reef off the island of Giglio on January 13, international attention inevitably focused on the actions of the master. But what was largely missed in the media storm that ensued were the genuine examples of bravery and professionalism displayed by members of the crew. There were 4,229 people on board the vessel at the time of the casualty and while the tragic loss of life caused by this regrettable incident will rightly be the subject of forensic investigations for some time to come, it should not be forgotten that without the skilled response of the majority of the crew, the loss of life could have been far higher.”

You can see the full list of winners here.