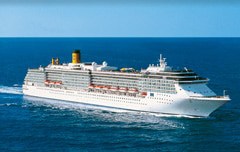 Costa Cruises announced today that they’ll be doubling up their Asian capacity starting in May 2013.

Costa Cruises plans to position a second cruise ship in Asia beginning in May 2013. Currently, the line operates the 2,394-guest Costa Victoria in Asia and will start sailing from Shanghai May 18, 2012. Costa Victoria replaces the 1,680-guest Costa Classica, which has been repositioned to the Mediterranean. In May 2013 the 2,680-guest Costa Atlantica also will be deployed in the region, giving Costa a combined total guest capacity of 5,074 — a 67 percent increase.

With the debut of Costa Victoria in May 2012 and Costa Atlantica in May 2013, Costa Cruises will offer a unique product for the Asian market called Italy at Sea, with Italian-style hospitality, shopping, art and cuisine.