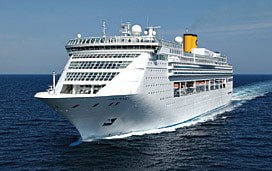 Porthole Cruise Magazine’s Readers’ Choice Awards are determined by thousands of the publication’s readers who vote on their favorite cruise lines in a variety of categories.

“We appreciate the recognition in these two competitive and important categories by Porthole’s discriminating readers,” said Ruben Perez, general manager of Costa Cruises North America. “Costa Cruises has always considered the Med to be our backyard. And as the first Western cruise line with a wholly owned sales and marketing office in China, we’re making Asia our new backyard, too.”

Top Mediterranean Itineraries
Costa Cruises is the largest Italian travel company and Europe’s number-one cruise line. In 2013, the line will deploy 12 ships across the eastern and western Mediterranean on itineraries ranging from three to 48 days.

Departing from several countries, the port-intensive cruises allow guests to explore some of the most popular, historical and cultural cities in the world. In addition to calls at well-known ports like Istanbul, Turkey; Santorini, Greece; Lisbon, Portugal, and Dubrovnik, Croatia, the ships also visit off-the-beaten-path ports like Kotor, Montenegro; Odessa, Ukraine; Split, Croatia, and Olbia, Italy.

Best Asia-Pacific Itineraries
As the first international cruise company to enter the Chinese market, Costa has become one of the best recognized and most popular tourism brands in Asia. Since the line began operations in Asia in 2006, Costa has carried more than 350,000 guests in the region.