Costa Cruises 53,000-ton, 1,697-passenger Costa Romantica will go in for a major refurbishment at San Giorgio del Porto shipyard in Genoa starting October 2011 through January 2012. The refurb which is slated for 90 million euros will add a lot new features to the ships existing configuration.

According to a press release issued by the company, “The extensive makeover will include construction of new areas and the introduction of services that represent a major evolution in the Costa product. A sophisticated ambiance will be created throughout Costa neoRomantica, starting with a contemporary, elegant and refined interior design.”

What can you expect during the refit? 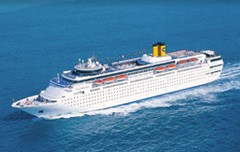 When the refit is complete at the end of January 2012, the ship will be renamed Costa neoRomantica. During the 2012 summer season, the ship will be positioned in northern Europe for two-week cruises on new itineraries.