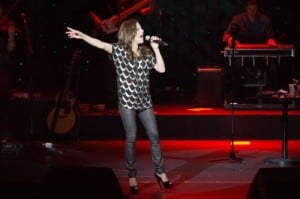 On Saturday, Royal Caribbean kicked off the the winter cruise season in New Orleans with a special concert by country-music superstar Martina McBride aboard their 3,138-passenger Voyager of the Seas.

Martina, who just released her latest album “ELEVEN” last month, treated guests to a 75-minute concert in the ship’s main theater. Martina told the audience this was her first time stepping foot on a cruise ship. The concert was open to all passengers sailing on the 7-night Thanksgiving cruise.
Just last weekend Carnival treated passengers to a pier-side concert with Maroon 5, kicking off the year-round service of Carnival Magic in Galveston, Texas.
The Voyager of the Seas is the largest ship ever to be homeported in New Orleans and will sail seven-night Western Caribbean cruises until April 2012, where the ship will then reposition to China. The ship boasts an ice-rink at sea, rock climbing walls, and the signature Royal Promanade down the center of the ship.
Voyager of the Seas is expected to bring over 50,000 passengers to New Orleans in the coming months.
Video from the Martina McBride concert: