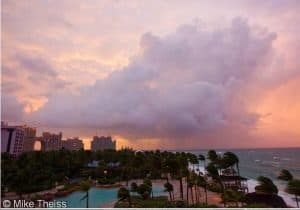 Below are the current itinerary changes due to Hurricane Irene:

Carnival Fasincation who’se scheduled for a 5-night Bahamas cruise out of Jacksoville, Florida will drop Freeport in exchange for a Fun Day at sea. The ship will only call at Nassau, Bahamas on Saturday.

Carnival Fantasy who’s  running a scheduled 6-night out of Charleston to Bermuda will now drop Bermuda, instead do Cozumel and Key West.

Carnival Pride is currently will be departing Baltimore on Monday, instead of Sunday.

Celebrity Summit who is currently sailing a Bermuda cruise out of NJ will leave Bermuda a day early, putting the ship home a day early. The next sailing will be Monday, August 29, a day late. Passengers will receive a check for partial credit.

Monarch of the Seas is on a 4-night cruise out of Port Canaveral. It will skip the private island of Coco Cay today and is spending it in Nassau. The next two days will be at sea.

Majesty of the Seas who’s on a 4-night out of Miami will not be calling on Coco Cay on Wednesday, instead going directly to Key West where it will over night on Wednesday night and leave Thursday afternoon to head back to Miami.

Freedom of the Seas is on a 7-night Eastern Caribbean cruise. The ships will not call on Coco Cay, Monday but instead Nassau.

ms Veendam August 21, 7-day Bermuda Cruise. The ship departed Bermuda at 5:00pm on Thursday, August 25, and is scheduled to arrive in New York one day early on Saturday, ahead of the storm’s anticipated arrival. Guests who desire to leave Saturday morning in advance of the storm will be able to do so. The next voyage will depart Monday at 2pm.

Princess Cruises Caribbean Princess’ departure from New York on Saturday, August 27, the ship’s arrival time in New York has been moved up one hour earlier to 6 a.m. that morning. Cruise check-in will now begin at 10 a.m. and not 1 p.m. as originally scheduled. Passengers are currently being contacted and advised to arrive at the cruise terminal as early as possible.

Disney Dream will not be stopping in Castaway Cay this weekend, insteading the ship will be spending an extra day in Nassau.

For additional information check the National Hurricane Center for the projected path of Hurricane Irene.