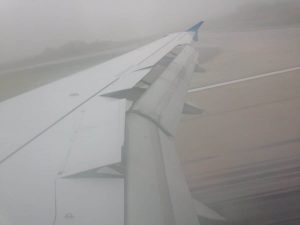 A foggy morning landing in Charlotte.

As I type this I’m in the air flying into St. Louis, MO to catch American Cruise Line’s 150-guest paddlewheeler, Queen of the Mississippi. The ship leaves the port at 1:30p to head northbound, up the Mississippi River, eventually ending in Minneapolis- St. Paul.

Usually I fly in the day before a cruise to make my cruise embarkation flawless. It gives me time to settle in and get acclimated before non-stop writing, interviews and videos.  Having just come off of a 15-day Canada/New England trip, I couldn’t fly in a day early and had to settle for a morning off departure, scheduled to arrive into St. Louis at 10:30am.

Let me back up to what was a normal day flying out of Jacksonville. Everything was good and we were Charlotte bound where I make my connection to St. Louis. In Jacksonville, you have to go to Charlotte, Atlanta or Newark if you want to get anywhere! We took off like clockwork at 7am.

We went to land in Charlotte and almost were touched down on the runway and suddenly the planes engines throttle up and the plane pitched up really fast. Fog set in over the airfield and visibility was not clear enough to land.

We got back up into the traffic pattern and they set us up for another runway. Which made my connection really tight in Charlotte. I ran from C terminal to E terminal and they were boarding my flight. Got on the plane, all to go nowhere fast. The fog got worse and because of  the weather, all the inbound airplanes had to be spaced further apart, delaying our departure to St. Louis. We finally take off 45-minutes late.

I made it to the St. Louis airport exactly two hours before my ship was to set sail. Have I been delayed any further I would have missed the ship and had to catch it upriver somewhere. Though the first stop was only 1.5 north of St. Louis, it still would have been a pain. A bigger pain if I was sailing a big cruise line and had to fly to the next port of call or scratch my vacation all together.

Moral of the story: Always fly into your embarkation port a day early so you’ll give yourself a buffer between your flight and your cruise. Expect the unexpected.

Cruise Transfers: Montreal and Quebec City, you have options