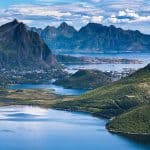 Holland America Line and Marine Conservation Institute have a partnership that supports the efforts of promising young scientists and graduate students.  This week, the two announced the recipients of the 2012 Mia J. Tegner Memorial Research Grants in Marine Environmental History and Historical Marine Ecology.

Aimed at studying  the history of ocean ecology to predict future impacts from human interactions, the information gathered through research studies is essential to help lawmakers, regulators, and conservationists set appropriate targets for marine conservation efforts that take into account the sustained health and productivity of the world’s oceans.

“We are proud to be advancing the science of marine conservation biology and historical marine ecology by supporting these efforts to better understand the history of our oceans,” said Dr. Lance Morgan, president and CEO of Marine Conservation Institute, a globally focused nonprofit organization dedicated to maintaining healthy, living oceans.

Out of 91 applications for research ranging from Antarctica to the Bering Sea, the 2012 Mia J. Tegner Memorial Research Grant Recipients are:

” The four projects we selected to fund will help establish historical baselines for ocean and coastal environments to better manage and protect imperiled ocean resources for the future,” said Morgan.

The grant program, made possible by funding from Holland America Line,  is a tribute to Dr. Mia J. Tegner, a marine biologist at Scripps Institution of Oceanography, who died in January 2001 while diving off the Southern California coast.

“I am impressed with the passion and dedication of these researchers whose work covers a wide variety of disciplines,” said Richard Meadows, executive vice president, marketing, sales and guest programs, Holland America Line. “I am proud that Holland America Line can help support these important programs again in 2012.”

Holland America’s  funding is an extension of “Our Marvelous Oceans,” a three-year program announced by the two partners in 2010. The partnership also includes guest and staff education, support for marine conservation biology research and the recent creation of a sustainable seafood program with environmentally responsible purchasing practices and menus that showcase sustainable seafood.