Norwegian Cruise Line, Royal Caribbean, and Princess Cruises are all reporting damage to their private resort-like islands, which are all based in the Bahamas. 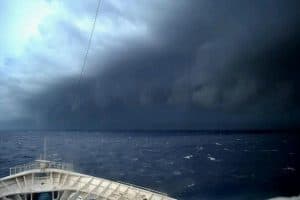 Royal Caribbean has canceled this weekend’s calls to their private island Coco Cay, located 55 miles north of Nassau. The company said on their website earlier today “Regrettably, the island of CocoCay, Bahamas, was impacted by the storm, and we feel our guest’s experience ashore would be disrupted. Because of this, we have cancelled Majesty of the Seas’ call to CocoCay on Saturday, August 27, and Monarch of the Seas’ (pictured right) call to CocoCay on Sunday, August 28.”

Princess Cruise Line’s private beach which is located on the southern portion of Eleuthera Island, possibly could have taken the brunt of the storm. The island’s 30 miles east of Nassau, which would put the eye of the storm directly over the island. Early reports are that there’s significant damage to Eleuthera. A spokeswoman for the cruise line told us, “Princess Cays did have slight damage but we’re confident it will be in full operation for our next call there on September 30.”

There’s still no word on Holland America and Carnival’s island, Half-Moon Cay, located 100 miles SE of Nassau. There’s a good chance the island faced damages too, located just south of Eleuthrea. We received a response from Holland America telling us that “it’ll be a day before they can get a flight out and assess the damage.”

The Carnival ships that were supposed to call at Half-Moon Cay this weekend are now going to overnight in Nassau or spend an extra day at sea.

Disney Cruise Line’s have also changed their itinerary to one ship this weekend, noting that they have to assess their private island Castaway Cay.

Cruise lines own and operate these private islands for exclusive use for their guests.